The United States Blues
Home Economics Trump’s trade war is on the verge of costing American farmers a... 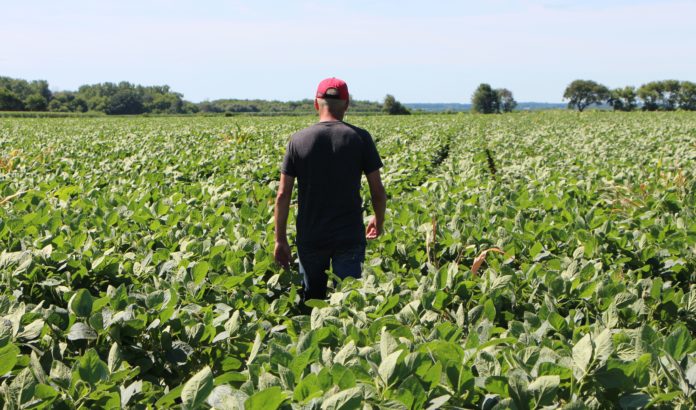 While he claims that China will eventually make a deal with him, President Donald Trump’s escalating trade war is about to cost American farmers a $9 billion a year market.

A statement this week from the American Farm Bureau Federation (AFBF) made it clear that farmers on the verge of utter collapse, with the AFBF warning:

“China’s announcement that it will not buy any agricultural products from the United States is a body blow to thousands of farmers and ranchers who are already struggling to get by.”

China stopped buying U.S. agricultural products in response to Trump’s Aug. 1 promise to slap an additional 10% tariff on goods from China. Even Senate Majority Leader Mitch McConnell admits that such tariffs are nothing more than a tax paid by American consumers.

Trump latest tariff announcement sent the stock markets tumbling, and China’s response has not helped. Between Aug. 1 and Aug. 6, the Dow Jones lost more than 1,000 points.

Zippy Duvall, president of AFBF, says the entire Chinese market for farmers could now be closed permanently, and that means losses that are beyond what were once anticipated:

“Farm Bureau economists tell us exports to China were down by $1.3 billion during the first half of the year, Now, we stand to lose all of what was a $9.1 billion market in 2018, which was down sharply from the $19.5 billion U.S. farmers exported to China in 2017.”

Be sure and note those numbers: The China market was already down by $10 billion, and now what remains of it — $9 billion — is about to be flushed down the toilet just so Trump can pretend he’s tough on the Chinese and a great negotiator.

Despite the pain being felt by farmers, Trump told reporters on Wednesday that the United States is “in a very good position” with China, even claiming the trade war is harming the Chinese much more than the U.S.

As if that’s not bad enough, Agriculture Secretary Sonny Perdue rubbed salt into the wounds of farmers this week, telling a group of them:

“What do you call two farmers in a basement? A whine cellar.”

Perdue was roundly booed by the farmers for his pathetic attempt at a joke:

Farmer tells @SecretarySonny Perdue he has problem with the USDA reports. Acreage report killed price rally. Perdue defends NASS
“There’s no cynicism or conspiracy there at all.”
Perdue gets a few boos at a joke: What do you call 2 farmers in a basement? A whine cellar.”

Here’s the bottom line: Farmers are going to lose their farms, taxpayers are going to have to bail out large farmers to the tune of tens of billions in corporate welfare, and American consumers are going to pay on average an additional $3 billion a month on goods imported from China.

If this is Trump’s idea of “winning,” it sure feels a hell of a lot like losing, doesn’t it?