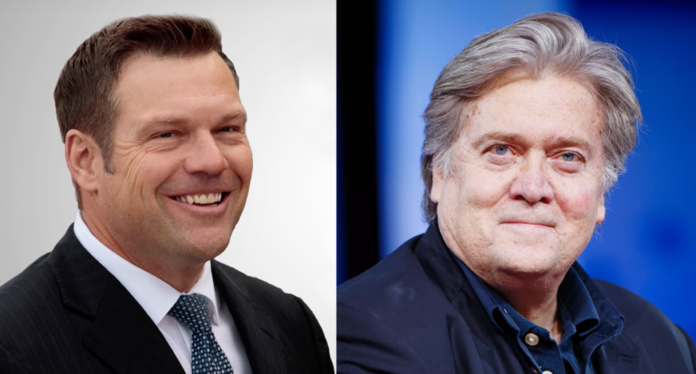 Would it surprise anybody if a paid writer for the right-wing white supremacist rag, Breitbart News, is also working as vice chair for Trump’s commission to restrict voting under the guise of “integrity?” Kris Kobach sits on the Presidential Advisory Commission on Election Integrity, along with VP Pence. There are at least seven federal lawsuits pending against the Commission, but now Kobach is facing a new charge from Citizens for Responsibility and Ethics in Washington (CREW). They claim Kobach has violated a federal conflict of interest law by working simultaneously for Breitbart and Trump.

CREW is calling for an investigation into the matter by the Justice Department.

While chairing the commission, Kobach wrote a column for Breitbart alleging serious voter fraud in New Hampshire. Then he cited the column during a commission meeting in the state. His bio on the Breitbart column referenced his status as vice chair.

“The official actions of government employees should be free from any actual or apparent influence from outside financial interests,” CREW Executive Director Noah Bookbinder said. “Secretary Kobach’s conduct, however, appears to undermine that principle, and should be investigated to determine if it violated the federal conflict of interest statute.”

CREW notes U.S. Code 208, a “criminal conflict of interest statute that prohibits an executive branch employee, including a special government employee, from participating personally and substantially in any particular government matter that will have a direct, predictable effect on his financial interest or any financial interest imputed to him.”

Now it appears that the Justice Department could take civil action against Kobach. That doesn’t seem to be on the radar for Kobach today, as he anticipates Trump’s arrival in Kansas for his campaign fundraiser. Kobach, currently the Secretary of State of Kansas, is hoping to become the Governor.

Donald Trump Jr. is reportedly headlining a VIP reception and dinner for the Kobach campaign today in Overland Park. Ticket costs are $1,000, and an extra $200 for dinner.

The Topeka Capital-Journal reported that Kobach met Trump Jr. through mutual friends in hunting before he met President Trump.

Mother Jones has reviewed Kobach’s track record in Kansas and has highlighted the “complete turmoil” that has resulted from voter restrictions he implemented there which he now hopes to take nationwide.

“[…] as Kobach turns his focus back to Kansas, a look at his track record there highlights a problem with his push to use his statewide achievements as a model: They’re in complete turmoil. One has been struck down in court, another has yielded almost no results, and a third has been wildly inaccurate and raised major security concerns,” wrote Ari Berman.

Kobach seems to have been picked by Trump to back up his still unsubstantiated claims of widespread illegal voting. The more the narrative is pushed by Trump and his so-called Commission on Election Integrity, the more there is no semblance of integrity there and only a thinly-veiled plot to prevent fair and accurate voting in future elections in America.

Looking forward to welcoming @DonaldJTrumpJr to Kansas for an exciting fundraiser for our campaign tonight! #TeamKobach #MAGA

For a real eye-opener on Kobach, watch this full-on musical from Full Frontal with Samantha Bee about Kobach’s work for FAIR:

Featured image: Screenshot via YouTube with Bannon via Wikimedia Commons