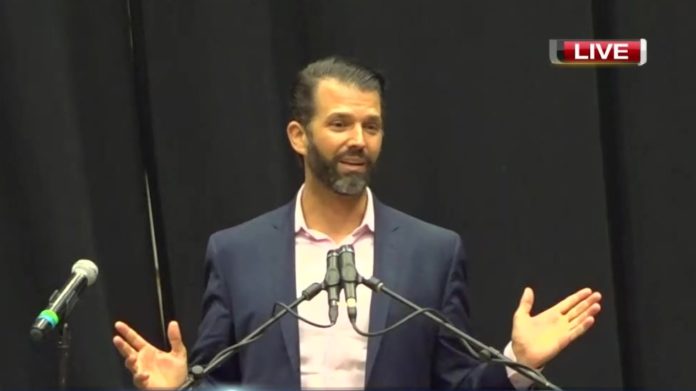 Donald Trump Jr. was in Kentucky on Thursday, speaking at a so-called campaign rally for GOP Governor Matt Bevin, and it when the president’s son began speaking, it quickly became clear that Junior isn’t exactly aware of how average Americans live.

First, there was the sparse attendance, which was reportedly so paltry that a reporter for Kentucky Public Radio noted:

“Organizers have asked the audience to move out of the seats and closer to the stage ahead of Trump Jr/ Gov. Bevin event in Pikeville. I think it’s fair to say this is sparsely attended.”

Organizers have asked the audience to move out of the seats and closer to the stage ahead of Trump Jr/ Gov. Bevin event in Pikeville.
I think it’s fair to say this is sparsely attended. pic.twitter.com/JghTohDROS

Then Don Jr. began speaking, and that’s when things got really bizarre.

Junior said he can’t possibly be a racist because his girlfriend, Kimberly Guilfoyle, is Puerto Rican:

Trump Jr says he’s often accused of being a racist, but he “must be a really bad one” because he has a Puerto Rican girlfriend

That was followed by a claim that Don Jr. understands what it’s like to grow up in the Rust Belt because he went to a boarding school in Pottstown, Pennsylvania and can relate to working-class issues:

Trump Jr says he partly grew up in the rust belt because he went to a boarding school in Pottstown, PA, understands working class issues

“This not your grandfather’s Democrat Party, this is socialism”

A trust fund baby born with a silver spoon in his mouth who has never done an honest day’s work understands working-class issues? Was a laugh track provided for Junior’s remarks, too?

Be sure and notice the use of “socialism,” in Don Jr.’s remark. His father is paying American farmers billions of tax dollars so he can continue his failed trade war and makes us all pay for his golfing trips, but Democrats are socialists?

As they say in the South, Bless his heart! Junior wants to pretend he’s important or even relevant. But he’s just a spoiled little rich boy who wants to play at politics. It’s painful and embarrassing to watch.