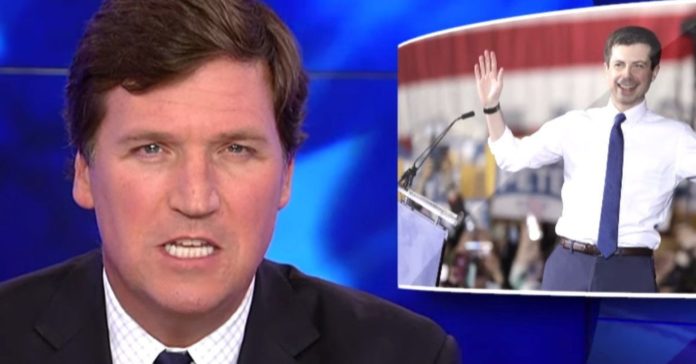 During a segment on the Democratic candidates seeking the White House, Carlson said that mayor of South Bend, Indiana, was the latest media favorite, having replaced former Rep. Beto O’Rourke (D-TX), who failed in his bid to win a Senate seat last year:

“They’ve left you for a younger, hotter candidate. They split with some guy from Indiana, you can’t even pronounce the guy’s name.”

Carlson then played a montage of video clips various commentators praising Buttgieg, including one in which MSNBC host Nicolle Wallace remarked:

“This guy is chicken soup for my soul.”

That led Tucker to look into the camera and declare:

“Chicken soup for my soul? Even by the naughty standards of the news media, this is a new level of political commitment. They don’t just want to vote for this guy. They want to consume him, like a hearty stew. Every last drop of Buttigieg. Yum! They’re all in.”

It didn’t take long for those remarks to reverberate around the internet, with some people saying Carlson had weirded them out beyond belief and others speculating that the Fox host was attempting to attack Buttigieg’s sexual orientation. Take a look:

My laptop just got slapped with a restraining order *and* a court-ordered sex offender registry for playing this.

Sounds like Tucker needs a long vacation. Maybe an indefinite one.