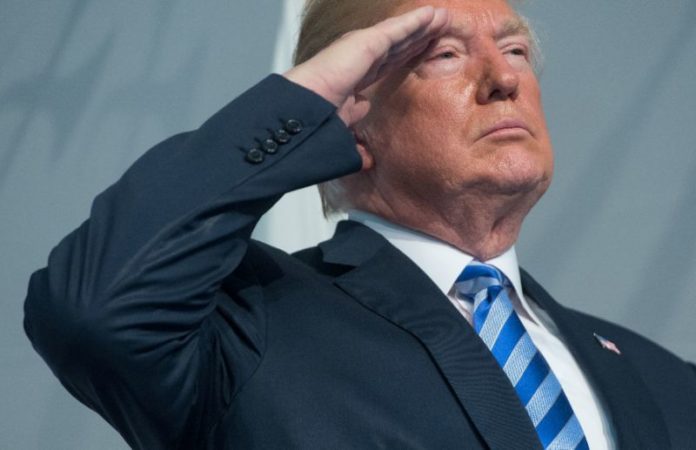 President Donald Trump dared to use wounded troops as political props again, and Twitter took him to the woodshed for it.

Trump visited Walter Reed Army Medical Center this week to meet with several wounded soldiers who have returned from combat in Syria and Afghanistan. Soon enough, he took to Twitter to brag about it:

It was great meeting some of our outstanding young military personnel who were wounded in both Syria and Afghanistan. Their wounds are deep but their spirit is sooo high. They will recoverer & be back very soon. America loves them. Walter Reed Hospital is AMAZING – Thank you all!

Usually, a post like this would be considered thoughtful, but Trump has repeatedly pretended to care about the troops in the past only to show that he really doesn’t care at all, such as when he cancelled an appearance at a World War I memorial cemetery in France in November because of light rain. Trump would go on to skip visiting Arlington National Cemetery on Veteran’s Day.

Clearly, Trump uses troops as props, and Twitter wasn’t about to let him get away with it this time either:

Trump has some nerve pretending like he cares about our military personnel seeing as how he dodged the draft using fraudulent notes from two different doctors and boasted that his Vietnam War was escaping STDs while his fellow countrymen were dying overseas. Shameful.

Trump is now using our wounded warriors at Walter Reed as political props for propaganda points. It’s like when he visited the Parkland kids at Broward County Hospital after a brutal mass shooting yet is in bed with the NRA. Or when he went to Puerto Rico to throw paper towels.

These are the true heroes of this nation. Please listen to your generals and advisors regarding the proper moves militarily in these regions. You owe it to people like these.

Maybe you can honor them by actually coming up with a real strategy and not changing it every other day!

Says the guy who refuses to meet the families of the fallen at Dover Air Force base and mocks POWs and Gold Star families.

I just soooooooooo love it when Generalissimo Chickenhawk J. Bone Spurs uses the troops as props, especially when he sends them to the border to defend against an imaginary threat because there’s an election happening, or pretends to care about them during some ginned-up photo-op

The thanks from a draft dodger means NOTHING

So then listen to your military and defense experts and don’t play politics with the conflicts we fight and honor their sacrifices by protecting what they fought for. Pulling out without consulting experts is irresponsible and offensive to all who lost their life and limb. #DOD

Trump’s military decisions have only made the situation more dangerous for our troops in the Middle East, especially Syria, where four Americans were killed in a bombing by ISIS shortly after Trump had declared ISIS defeated.

And it’s not like the military loves Trump. as a recent poll shows that his approval rating among active-duty troops is dropping.

Trump’s actions speak louder than words, and his actions prove that he lies every time he claims to love and respect our soldiers. This time is no different as it’s only a matter of time before Trump makes another decision that totally undermines what he just tweeted.