The United States Blues
Home News Twitter crushes Trump for telling Pelosi he did ‘nothing wrong’ to warrant... 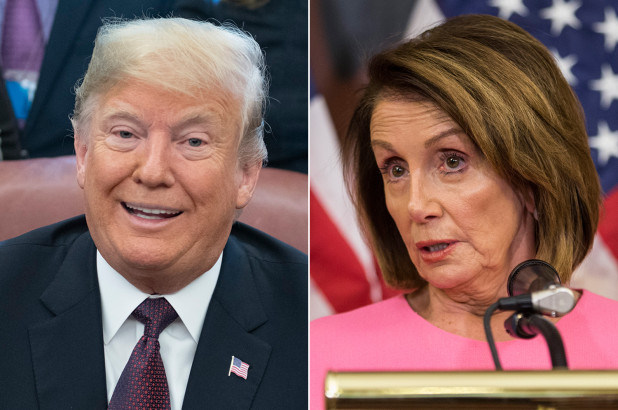 President Donald Trump insisted that he has done “nothing wrong” to warrant impeachment in a Twitter post aimed at House Speaker Nancy Pelosi (D-Calif.) on Wednesday morning, drawing backlash from Twitter users who were all too happy to define his high crimes and misdemeanors.

On Monday, Pelosi brushed off the idea of impeaching Trump:

“I’m not for impeachment,” she said. “Impeachment is so divisive to the country that unless there’s something so compelling and overwhelming and bipartisan, I don’t think we should go down that path, because it divides the country. And he’s just not worth it.”

And considering Republicans control the Senate, impeachment would be waste of time anyway. Pelosi is likely making a calculation ahead of 2020 that the voters will impeach Trump themselves by ousting him from office, thereby putting him in the cross hairs of federal and state prosecutors who will indict him.

In response to Pelosi’s statement on impeachment, Trump claimed he has done “nothing wrong.”

I greatly appreciate Nancy Pelosi’s statement against impeachment, but everyone must remember the minor fact that I never did anything wrong, the Economy and Unemployment are the best ever, Military and Vets are great – and many other successes! How do you impeach….

….a man who is considered by many to be the President with the most successful first two years in history, especially when he has done nothing wrong and impeachment is for “high crimes and misdemeanors”?

The fact is that Trump directed and coordinated campaign finance felonies during the 2016 Election to cover up his extramarital affairs and lied about it. Felonies are high crimes. Trump is also being investigated for a myriad of other crimes such as insurance fraud, tax evasion, obstruction of justice and conspiracy against the United States, just to name a few.

The panic of Trump’s tweets today bring me an inappropriate amount of joy…anyone else feel that too?

Demented grandpa is up early this morning.

This tweet is exactly why you should be impeached.

You never did anything wrong? So if Kamala Harris pays off a person who has dirt on her and has her best friend ask foreign countries for help hacking your emails, and then wins the 2020 election, you will have no issue with this? Just want to get that on the record.

my dude, have you ever heard of rope-a-dope?

These whiny, guilt-ridden tweets are PATHETIC. You know the High Crimes & Misdemeanors you’ve committed. You know what you’ve done in DC & for decades in NY. That’s why you desperately try all day & night to tweet your way out of jail. Impeachment is the least of your worries…

Impeachment takes too long. You have been such a failing, flailing disaster that the only thing that would truly be justice served is your incarceration. Your delusions of grandeur, your pathological propaganda, your hate fueled rhetoric aren’t impeachable, they’re certifiable.

Clearly, there plenty of reasons to impeach Trump, and it would have happened by now if Democrats controlled the Senate or if Republicans had any integrity. But they don’t, and that’s why it will be up to the voting public to do what Republicans are too cowardly to do.