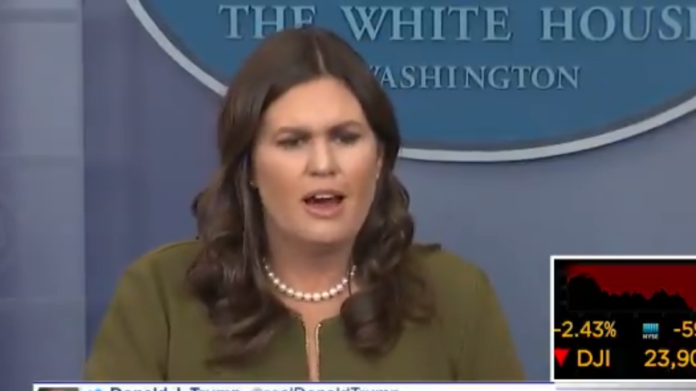 President Donald Trump has started a trade war with China, and on Friday he sent his press secretary out to explain why exactly his threats of new tariffs on imports from some nations seem to be doing harm to the economy, with the Dow Jones Industrial Average falling over 700 points in today’s session.

Sarah Huckabee Sanders was asked by Jonathan Karl of ABC News if the president was still confident he could win a trade war. Sanders responded that Trump was “absolutely” sure he would win because:

“If he is in charge of those negotiations… he’s the best negotiator at the table.”

Press Sec. Sanders tells @jonkarl that Pres. Trump “absolutely” still believes trade wars are easy to win “if he is in charge of those negotiations…he’s the best negotiator at the table.” https://t.co/XQ7uJkSKKT pic.twitter.com/c0Je4qVInO

A man who has filed for Chapter 11 bankruptcy protection six times is the “best negotiator” at the table? If that’s the case, then the administration might want to go ahead and start waving their white flag.

Keep in mind that other economic news also arrived on Friday: The monthly job creation report, which fell way below what had been predicted. Job growth fell to a six-month low, with only 103,000 jobs being created. Economists had been expecting at least 185,000 new jobs.

Does any of this sound like what the “best negotiator” would achieve?

Twitter had a field day with the remarks from Ms. Sanders:

The best negotiator? Who is paying for the wall?? #NoWall #FakePresidentTrump pic.twitter.com/qygQ0lQIGB

And William Shatner thought it was a great idea to record an album….

Can someone please tell me when all the “winning” is supposed to begin?