The United States Blues
Home News Twitter Humiliates Trump For Teleconferencing With Troops Instead Of Visiting Them In... 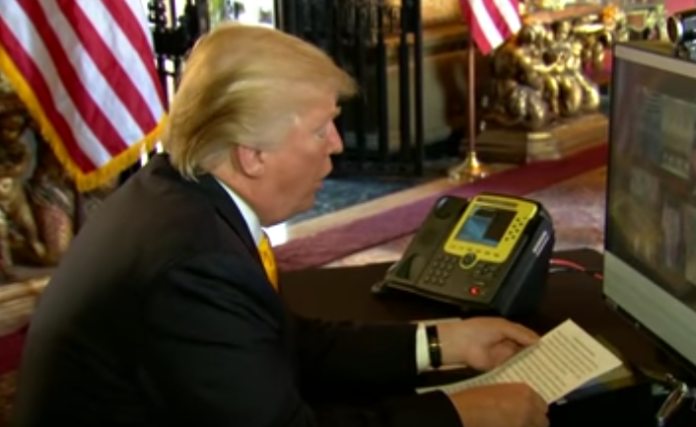 President Donald Trump is teleconferencing with the troops from his lavish Mar-a-Lago resort on Thanksgiving, resulting in humiliating reminders that he is a coward.

Trump has refused to visit the troops in war zones in the two years since taking office, which is the opposite of what past presidents have done.

He could have chosen to surprise them with a visit on Thanksgiving. Instead, Trump is going to merely speak to them via a Skype session from the comfort of his resort where he can sit on his ass and use them like props before heading out to the golf course.

Will be speaking with our great military in different parts of the world, through teleconference, at 9:00 A.M. Eastern. Then it will be off to see our Coast Guard patriots & to thank them for the great job they have been doing, especially with the hurricanes. Happy Thanksgiving!

You see, Trump is too scared to visit our troops serving in combat zones. He dodged the draft five times during the Vietnam War to avoid war zones. Now he’s declining to go to war zones to visit our troops as president, which is incredibly disrespectful. Our troops risk their lives fighting for us. The least Trump can do is visit them in person to thank them for their service and sacrifice.

You are literally the only President in modern times who has failed to visit the US Military abroad on Thanksgiving. You are a coward and a disgrace. Before you go to jail please know the contempt in which you are held. You failed in every possible way.

Trump Tweet Translator:
“Will be speaking with our great military in dangerous parts of the world, through teleconference, because I’m a well-known coward. Then it will be off to see our Coast Guard patriots, because it’s an easy trip from Mar-A-Lago! Happy Thanksgiving!”

President Obama visited U.S. troops in Baghdad in April 2009 and made eight visits in all to Afghanistan as President. In contrast Trump today is making a Skype call to the military from his exclusive country club Mar-a-Lago. This is what a REAL President looks like: pic.twitter.com/Hm9YPchOiD

Teleconference? Not brave. A real commander-in-chief visits its hard working military at combat zones. Like all your predecessors.

Teleconference from your luxury golf resort? Talk about phoning it in! You are really, really bad at this pic.twitter.com/T1lR91XFVI

But I will not visit the troops abroad because, frankly, the troops and veterans are merely tools I leverage to create acrimonious divisiveness among Americans. And also I’m a scaredy cat with delicate hair

I will courageously MAKE A PHONE CALL. I can’t visit them though because my aides tell me it’s too dangerous! pic.twitter.com/f1NgUIoPVX

Yeah, and you can bask in the warmth of your mansion at Mar-a-Lago where you can stay safe and dry. That’s really brave of you.
You should probably be sitting during it. Wouldn’t want to flare up the old bone spurs!#CadetBoneSpurs

Just like he did when he refused to attend a Veteran’s Day ceremony due to rain, Trump is dishonoring the troops and killing morale by not visiting them in war zones.

In short, not only has Trump disrespected dead American soldiers, he is disrespecting living ones as well. Our troops and Americans across the country should be ashamed of him and his cowardice.