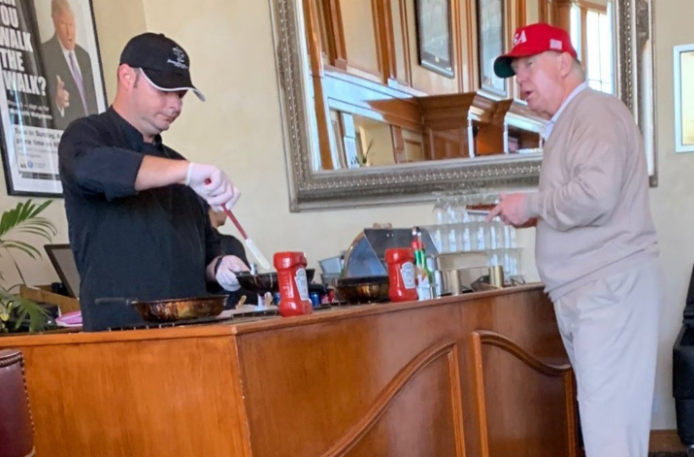 President Donald Trump took a time-out from golfing and eating omelettes on Saturday to yell about building his wall on Twitter during his day-long “executive time.”

Not long after declaring a national emergency and refuting his own administration’s immigration statistics to do it, Trump demonstrated that there’s no emergency at all by jetting off to Mar-a-Lago for the weekend.

But he apparently got bored, so he tweeted out some fodder for his hardcore cult members to eat up.

The problem is that his wall isn’t actually being built. The only thing being done at the border right now is repairs to old fencing. Furthermore, Congress only approved $1.3 billion for 55 additional miles of fencing, not a wall. And since Trump’s national emergency declaration is likely to be blocked by the courts, he won’t be building his wall any time soon.

No, Trump is actually playing golf after declaring a fake national emergency to pander to his bigoted base like a demagogue.

Meanwhile…every single Representative whose districts are on the border, including the Republicans, think the Wall is a stupid fucking idea. Even more stupid than the morons at your rallies. Yes THAT stupid.

Build it and people will continue to use the same exact means they are already using to enter the country (flying in on a temporary visa) and smuggle in drugs (cargo ships).

It’s a huge waste of money. The biggest. Believe me.

No you aren’t. You are eating omelettes and playing golf.

Right. So we all pretend you’re building an invisible make-believe wall so we can get rid of the military? Because yesterday you told us we won’t need a military anymore if we have a wall … & it wasn’t even the dumbest thing you said that day.

NO YOU’RE NOT! You got $1.3-billion to repair existing fencing and to put up some new fencing over 55 miles. Everyone but your rapidly-shrinking brainwashed base knows the truth. You FAILED. You got BEAT by ‘Chuck n Nancy’. LOSER! #Trump

Seriously, if this were a real emergency the president would not be golfing and eating omelettes at a fancy resort. He would be in the White House working. America knows it. Congress knows it. Even Trump knows it. The only ones who don’t know it is his most brainwashed supporters. Or as former Secretary of State Rex Tillerson would call them, “fucking morons.”