The United States Blues
Home News Twitter laughs at vengeful Trump for calling to reject the politics of... 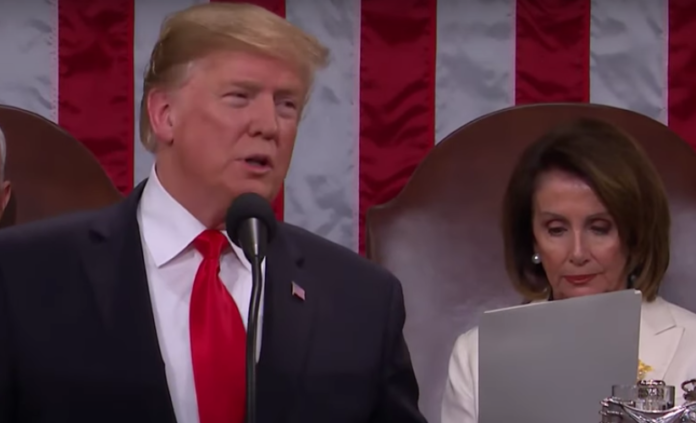 President Donald Trump is all about getting revenge. That’s literally something he has practiced since day one of his administration. And it’s why people are laughing at him after he hypocritically called for rejecting political revenge during the State of the Union on Tuesday night.

The State of the Union address finally arrives a week after it had been originally scheduled. The speech had to be canceled due to the government shutdown, and so, here we are.

Desperate and hypocritical as usual, Trump attempted to deliver a speech focused on talking about compromise, cooperation and unity, which are all things that Trump has never been interested in since he took office, preferring to throw temper tantrums, make demands and act like a bully in order to get his way.

“We can make our families stronger, our culture richer, our faith deeper and our Middle Class bigger and more prosperous than ever before,“ Trump said. “But we must reject the politics of revenge, resistance and retribution and embrace the boundless potential of cooperation, compromise, and the common good. We must choose between greatness or gridlock, results or resistance, vision or vengeance, incredible progress or pointless destruction. Tonight, I ask you to choose greatness.”

This is a man who has spent most of his time in office doing nothing but trying to take revenge on anyone who criticizes him or tells him no.

For instance, after House Speaker Nancy Pelosi (D-Calif.) asked Trump to delay the SOTU until after the shutdown, Trump retaliated by cancelling her trip to visit the troops overseas.

Trump also retaliated against our allies by slapping more tariffs against them after they enacted retaliatory tariffs against us following his steel and aluminum tariffs.

Yet, Trump has the gall to call for rejecting the “politics of revenge.” And with that, the whole nation replied at once, “You first.”

Trump said in SOTU, “We must reject the politics of revenge, resistance and retribution.”

Trump also proudly seeks revenge and retribution on his political foes daily and considers himself a prized counter-puncher.

Trump talking about a reciprocal tariff thing. I thought he wasn’t about the politics of revenge? what happened?#Trump #SOTU #StateOfTheUnion

“We must reject the politics of revenge,” says Trump, whose entire life is built upon his obsession with seeking revenge. #SOTU https://t.co/pHpIHGtMwr

Trump has been about the politics of revenge and retribution his entire life, this “unity” and “nobility” speech rings hollow – especially when he juts out his chin like Mussolini. #SOTU His facial expressions speak louder than his words.

“We must reject the politics of revenge, resistance, and retribution.” – Donald Trump

Fact Check: Donald Trump has not shown any commitment to this during his entire presidency #SOTU

“We must reject politics of revenge.”-POTUS. As moms we know that the proof is in the pudding! We want a leader who will lead. So you go first @realDonaldTrump! #SOTU #StateofOURUnion

Did Donald Trump just say to reject the politics of revenge? I took a drink of water just to fuel a spit-take for that one. #SOTU

Trump: “We must reject the politics of revenge, resistance and retribution”

Mrs Nancy: (and the rest of us) #SOTU pic.twitter.com/iIMIzX80q0

Now if only Trump would practice what he preaches he’d actually have a minuscule amount of credibility. But we all know that isn’t going to happen. Trump is a pretend president who is merely pretending to care about country and compromise. The major television networks would have been better off airing new episodes of their hit shows. At least that fiction is more believable and entertaining.