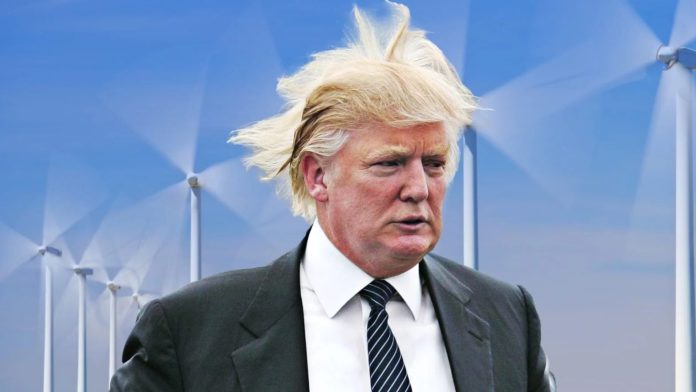 President Donald Trump wound up getting endlessly mocked for a claim he made Tuesday evening that windmills and wind farms produce a noise that causes cancer.

At a National Republican Congressional Committee (NRCC) fundraising dinner, Trump had this to say about wind power and wind farms:

“Hillary wanted to put up wind, wind. If you have a windmill anywhere near your house, congratulations your house just went down 75% in value.

“And they say the noise causes cancer.”

There is absolutely ZERO scientific evidence that wind or windmills cause cancer, as Twitter was quick to remind the notoriously fact-free president:

1. Exercise is bad for you

3. Global warming is a hoax

He’s the most powerful man on earth

What’s the opposite of hinged? https://t.co/3rJOl1NwMZ

The “wind turbines give you cancer” thing is such a deep cut in the conspiracy ecosystem, it’s remarkable it navigated its way to Trump, who doesn’t really use the internet other than to tweet.

Whatever grapevine he heard this through must have some really wild stuff in it.

It’s great that the leader of the most powerful nation on earth is either profoundly stupid or suffering from dementia. https://t.co/kqODY8SmzN

….okay i just HAVE to reference this now pic.twitter.com/QpRW6LMMyY

seriously. What is going on people? https://t.co/ubWtq9Ys0X

I am definitely not getting into the cancer thing (what?) but it was just 2 weeks ago that Danish researchers found no significant relationship between wind farms and heart attacks and strokes. https://t.co/putaQmGIqI

Sure, let’s give the craziest person we can find control of our nuclear arsenal. What could possibly go wrong?