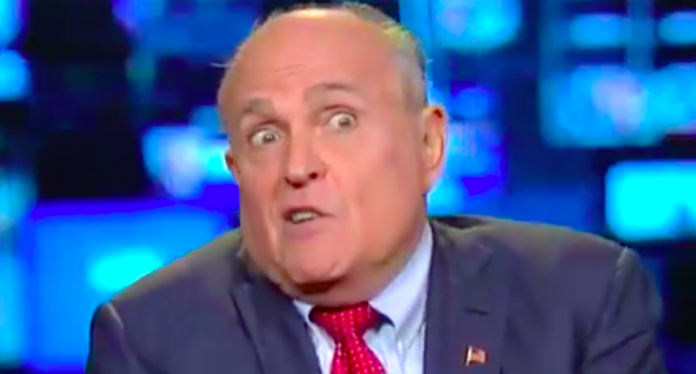 President Donald Trump’s lawyer Rudy Giuliani made a complete fool of himself on Saturday by bragging about the other attorneys on Trump’s legal team and insisting that Trump is “innocent” per the Mueller report. Twitter didn’t let him get away with it.

Mueller concluded that he could not indict Trump because of Justice Department guidelines and while he didn’t find a smoking gun to conclude that Trump committed conspiracy, he did find evidence.

He also listed at least ten instances of obstruction of justice and referred the matter to Congress.

Even Attorney General William Barr wrote in his four page summary of the report that Trump is not exonerated.

The lawyer who led us from beginning to end deserves the most credit @JaySekulow , no better lawyer in America. Jane and Marty Raskin are unsung heroes, both great lawyers. And John Dowd’s strategy gave us the basis to let truth prevail. Most important our client is INNOCENT.

This would be a good time to point out that Trump is still being investigated for tax evasion, insurance fraud, money laundering and a whole host of other crimes by federal and state prosecutors. He’s also being investigated by several congressional committees and is known as “Individual 1” in legal documents pertaining to the campaign finance felonies he directed his former lawyer Michael Cohen to commit.

Was he the lawyer who engaged in unethical behavior, according to the Mueller report? Or was that you?

There are a lot of things you can try & spin from the report. Being “innocent” is just not one of them. https://t.co/oezTyXkcWA

So you didn’t read the report either?

Credit for what? Mueller showed us all evidence that Trump is a criminal. Now it’s up to Congress to take the next step.

This is the “truth isn’t truth” Rudy was talking about.

Every tweet makes it harder and harder to understand how you ever held elected office.

Innocent? He’s staring down a multi-count indictment for obstruction the day he leaves office. My advice: get your retainer fee up front. Your client is notorious for stiffing people who work for him.

No “innocent” person commands his people to hide the documents that supposedly proclaim his innocence.

Oh, Rudy Fooliani. For ONE day, you seemed like so much less of a shithead here in NY.

Now the rest of the country sees why you were so despised as Mayor of NY. You suck.

Rudy only read the Barr fictional summary. Boy is he in for a surprise when he reads the full report.

Is this your official rebuttal?

Can you please highlight the part of the report that states this Rudy ? It looks to me like mueller laid out a roadmap for congress to #ImpeachTrump pic.twitter.com/qukjqCAOnb

Does he take notes?

Mueller: “Congress may apply the obstruction laws to the President’s corrupt exercise of the powers of office.”

OBSTRUCTION OF JUSTICE IS AN IMPEACHABLE CRIME!

Giuliani should just stay off Twitter because he’s only embarrassing himself.