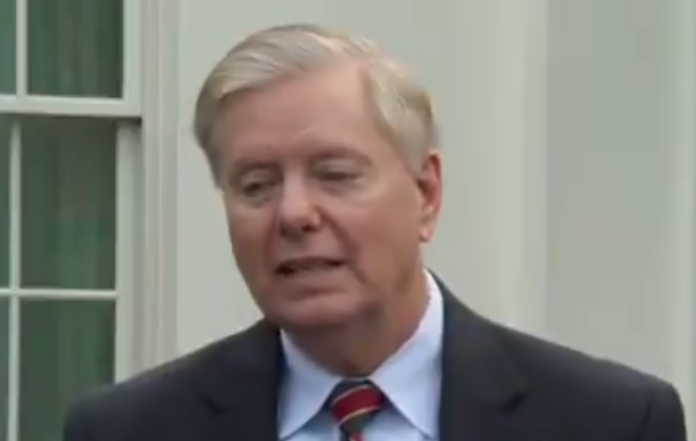 Senator Lindsey Graham (R-S.C.) became the object of widespread ridicule and mockery on Sunday when he slipped up by telling reporters that President Donald Trump’s border wall is just a “metaphor.”

The government shutdown has lasted over a week now because Trump didn’t get billions of taxpayer dollars to pay for his vanity project, which has gone from being a wall to not being a wall, but a barrier or steel slats as Trump continues to desperately rebrand the wall in a pathetic effort to dupe Democrats into funding it.

And now the wall is nothing more than a $5 billion “metaphor” according to Graham, who spoke to reporters after taking a break from a meeting with Trump.

“The wall has become a metaphor for border security,” Graham said before going on to claim that Trump won’t sign a bill to end the shutdown unless he gets his way.

Sen. Lindsey Graham: “The wall has become a metaphor for border security” pic.twitter.com/vXrmJpUV52

If Trump really cared about border security, he would sign the bipartisan continuing resolution unanimously passed by the Senate prior to Christmas, which included a whole lot of extra border security funding, albeit without wall money. Furthermore, he could have signed a deal offered by Democrats earlier this year that would have included $25 billion for his wall and a load of border security funds, but he rejected both bills over a wall that will do nothing to stop illegal immigration and illicit drugs from crossing over into the country.

When has a metaphor ever been built out of steel or concrete?

Lindsey Graham Reduces Trump’s Border Wall To Just A ‘Metaphor’: The president’s wall turned into “steel slats,” a “beaded curtain” and has now become a figure of speech. https://t.co/1rrxwdpr0y pic.twitter.com/n6Xxqv4zqd

Lindsey Graham: “The wall has become a metaphor for border security.”

No. The wall was always a metaphor for racism.

I’m sure the people who are missing their paychecks over the holidays will love hearing they’re being sacrificed for a metaphor.

No. It’s become a metaphor for a trumped-up solution to a trumped-up problem that’s causing even more political paralysis, nativism, and unnecessary cruelty.https://t.co/qGYrA6Y67N

Lindsey Graham is a metaphor for compromised russian ass-et

Lindsey Graham has become a metaphor for lack of courage. https://t.co/dtmk99Z0NA

tRump’s wall is a metaphor for his penis. Nobody wants to see it and he cannot erect it. (Anti-tRump folks are warmly welcomed to follow me. tRump supporters who rear their ugly heads on my timeline will be ignored, muted, and/or blocked.)

We’re going to build that metaphor, and Mexico is going to pay for it. With metaphorical money. https://t.co/Qll6sfnjDA

Once again, Graham humiliated himself in his effort to defend and support Trump.