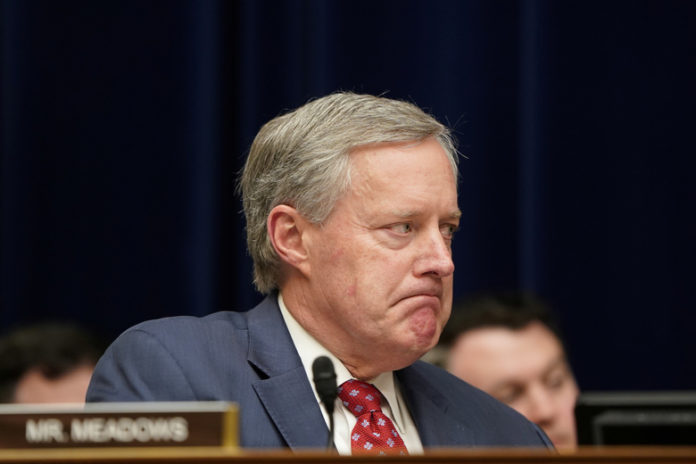 Near the end of Wednesday’s hearing of the House Oversight Committee at which President Donald Trump’s former attorney, Michael Cohen, testified, Rep. Mark Meadows (R-NC) had a full-scale meltdown when Rep. Rashida Tlaib (D-MI) suggested that Meadows’ parading of a black woman who works for the Department of Housing and Urban Development (HUD) was racist. Specifically, Tlaib commented:

“Just because someone has a person of color, a black person, working for them does not mean they aren’t racist and…the fact someone would actually use a prop, a black woman in this chamber, in this committee, is alone racist in itself.”

Meadows immediately became angry, suggesting that there was no way he could be racist because he has nieces and nephews who are “people of color.”

WOW — @RashidaTlaib accuses Mark Meadows of racism for using a black Trump administration official as a prop earlier during the hearing. Meadows interrupts her to “ask that her words be taken down.” pic.twitter.com/DK6rjmCNw8

Tlaib later said she wasn’t suggesting Meadows was a racist, but that his stunt earlier in the day had been unnecessary and unseemly.

However, it pays to recall that in the past Meadows has eagerly hopped aboard the racist “birther” train and suggested that former President Barack Obama wasn’t born in the United States, commenting at least twice that he wanted to send Obama “back home to Kenya or wherever.” Here he is saying exactly that:

Here’s Mark Meadows, who just sidetracked the entire House Oversight Committee to assure him he’s not racist, saying that “2012 is the time we are going to send Mr. Obama home to Kenya or wherever it is” pic.twitter.com/90L1xnWf6v

The blatant hypocrisy on the part of Congressman Meadows was too much for many on Twitter:

So I am apparently missing Mark Meadows having a meltdown about how he can’t be racist because he has black people in his family…. yo Senator Strom Thurmond had a black daughter & blocked the Civil Rights Act of 1964 for 24 hours in the US Senate…. really? #CohenHearing

Mark Meadows just doesn’t get it. To use a black woman essentially as an exhibit was, at best, insensitive. Jim Jordan’s focus on Rod Rosenstein is classic obfuscation. Yes, Cohen has lied. He’s a criminal. But he was a chief aide to your President. Awful day for Republicans

Next time someone uses the term “snowflake,” show them video of Mark Meadows responding to being called racist

Mark Meadows far more emotional about getting called out on his racist stunt than he ever was about the Charlottesville Rally, the separation of innocent kids from their parents at the border, or the dozens of attacks on people of color across the nation in the last months.

Sorry I was mistaken, Mark Meadows didn’t say that. He said nuh uh you’re racist, I have black friends and family, and THEN cried

There’s an old saying in the South that certainly seems to apply to Mr. Meadows: A hit dog will always holler. And Mark sure did a whole lotta hollering, didn’t he?