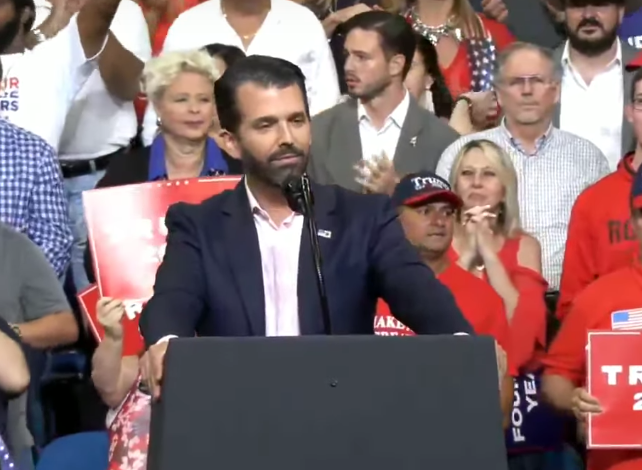 Biden’s son Beau succumbed to cancer in 2015, which is why he took on the task to lead former President Obama’s “Cancer Moonshot” commission to focus on finding a cure.

And it’s why he promised to continue working to find a cure as president if elected in 2020.

“I’ve worked so hard in my career that, I promise you, if I’m elected president, you’re going to see the single most important thing that changes America: We’re going to cure cancer,” Biden declared earlier this month.

It’s a noble fight against a disease that has claimed far too many American lives and has affected everyone.

But Trump Jr. treated it like a joke just minutes before his own dad made the exact same promise during his re-election campaign rally in Orlando.

“I hear brilliant guys like Joe Biden,” Trump Jr. said. “‘Government has failed you.’ Usually, as he’s groping someone. If government failed you, maybe you’re the problem, Joe Biden.”

Seriously, Trump Jr. is the last person who should be accusing Biden of groping when his own dad has openly bragged about grabbing women by their genitals without consent.

“There’s something off with that guy,” Trump Jr. continued. “What was the good one last week? Remember? Joe Biden comes out, ‘Well, if you elect me president, I’m going to cure cancer.’ Wow, why the hell didn’t you do that over the last 50 years, Joe?”

Donald Trump Jr.: “Joe Biden comes out. ‘Well, if you elect me president, I’m going to cure cancer.’ Wow. Why the hell didn’t you do that over the last 50 years, Joe?” #TrumpRallyOrlando https://t.co/FVgzrF3y67 pic.twitter.com/wa7TI9wo8H

And then Trump himself promised to cure cancer and AIDS.

In this single clip, Trump promises to cure cancer, AIDS, and “lay the foundation” for a Mars landing — all in his second term pic.twitter.com/aLZqbx2p3N

You just can’t make this stuff up. Unless you’re a Trump, of course. Because just like his other promises Trump is lying, merely copying the agenda of his most likely Democratic opponent who currently leads him in the polls. Now would be a good time to point out that Trump’s budget cuts funding for cancer research.

But Trump Jr’s mockery of Biden’s sincere promise to end the scourge of cancer drew a sharp backlash from angry Americans.

His son died of brain cancer in 2015 douchebag. It’s something that is personal with him as it is with many Americans. In addition to lacking spine, ethics, & brain you clearly lack any sense of humanity.

@DonaldJTrumpJr Too bad you turned out like your father, obnoxious, arrogant, and deliberately hurtful. Your cancer remark to Joe Biden was cruel and uncalled for. His son died of a brain tumor.

Excuse my language, Don Jr. @DonaldJTrumpJr is a piece of shit. Mocking someone who lost his son to cancer for wanting to work to cure cancer is too cynical.

There are many, many more where those came from. And let’s not forget that the Trumps got caught stealing money for themselves that should have gone to a cancer charity. They have no intention to cure cancer. But they intend to continue being a cancer on our country, and that’s why Americans must vote in November 2020.