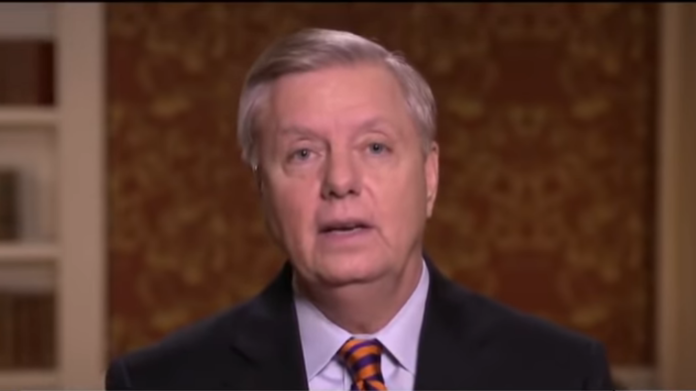 Earlier this month, in the first week of the government shutdown, Senator Lindsey Graham (R-SC) made a very dire prediction about what he thought would happen if President Donald Trump caved to Congressional Democrats and failed to get money for the border wall:

“He’s not going to sign a bill that doesn’t have money for the wall.

“I’ll tell you exactly how this is going to end. The president is going to challenge the Democrats to compromise, and if they continue to say no, they’re going to pay a price with the American people. … If he gives in now, that’s the end of 2019 in terms of him being an effective president. That’s probably the end of his presidency.”

But on Friday, when Trump did indeed give up and agree to reopen the government without getting a dime for his wall, Graham tried his best to put a positive spin on the president’s humiliating defeat:

Hope Congress – in a bipartisan fashion – will work with the President and take advantage of this moment.

Let’s make this a win-win for America!

Whatever you say, Lindsey.

But while Graham may have been counting on people not recalling what he had said a few weeks ago, Twitter has a long memory and was only too happy to remind the senator that he’s said that if Trump capitulated, his presidency would be finished:

I thought this was the end of his Presidency?

What are you thanking the President for……. this is the same deal he rejected 35 days and 800,000 American families’ withheld paychecks ago.

It must be tiring jumping from one side of the fence to the other.

wait a second! you promised us this would be the end this presidency!

Since Lindsey is such a dynamite prognosticator, maybe he can give us the final score of next weeks’s Super Bowl and the winning lottery numbers, too.