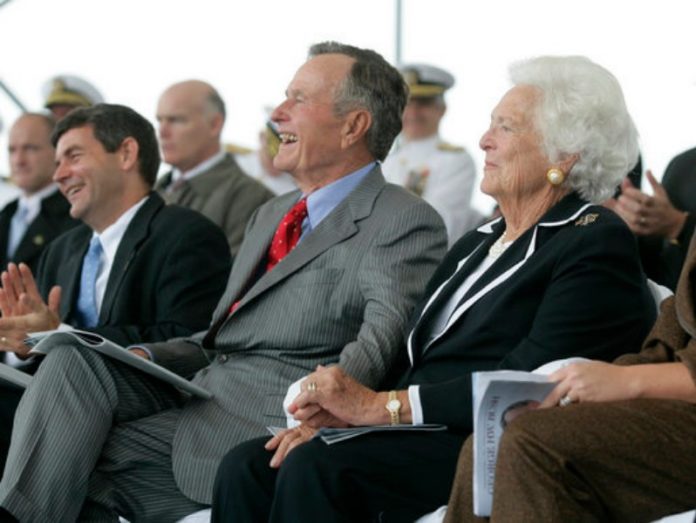 President Donald Trump attempted to pay tribute to former President George H. W. Bush, who passed away on Friday, in a statement that he clearly did not write himself, only to be reminded by Twitter that he is nothing like the elder Bush and that Bush hated his guts.

Tributes have poured in ever since as Bush is remembered for his military service and heroism during World War II, his common decency, and his leadership.

Of course, Trump pretended to give a damn, first by releasing a statement he clearly did not write himself:

He then followed up with a much shorter statement a few hours later, which may have also been written by someone else:

President George H.W. Bush led a long, successful and beautiful life. Whenever I was with him I saw his absolute joy for life and true pride in his family. His accomplishments were great from beginning to end. He was a truly wonderful man and will be missed by all!

And that would be all well and good if Trump had not been an absolute d*ck toward Bush.

In fact, the Bush family despises Trump so much they barred him from Barbara Bush’s funeral.

“I don’t like him,” the former CIA Director and 41st President once said. “I don’t know much about him, but I know he’s a blowhard. And I’m not too excited about him being a leader.”

Bush was unexcited about Trump, in fact, that he voted for Hillary Clinton in 2016.

He didn’t like you though. Pretty clear from his statements that he voted for Hillary. I’m just glad that (like Senator McCain) he won’t have to live to see the full extent of the damage you’re doing to the country and the institutions he served throughout his life.

Anyone who shamefully trades in feckless servility to brutal, murderous dictators like Kim, MBS & Putin has no rightful place eulogizing a true American war hero/patriot and CIA head like #GHWBush. Especially when the family can’t stand you…

Here is Trump jus a few months ago ridiculing George H.W. Bush famous words about a “thousand points of light” which was Bush’s call to promote volunteerism. Trump mocked that idea because for Trump it’s never about sacrifice to help others it’s always about “Trump First.” pic.twitter.com/5EJRPD4on7

Whenever you were with him?? Just exactly when was that? He wouldn’t even let you come to Barbara’s funeral… You’re such a lying phony. Nice try inserting yourself into his life….BS

George H.W. Bush was a decorated World War II veteran, a president who was elected without the help of Russia, was married to the love of his life for 73 years, and actually loved spending time with her, their children and grandchildren. You have zero in common with him.

He despised you and everything about your immoral, corrupt life. President #Bush41 was married for 73 years. He was a decorated military veteran. I disagreed with much of his politics. But he loved his family and his country. You aren’t fit to shine his boots, #Trump.

Seeing as how Trump is merely pretending to be a decent human being, Americans would be better off reading a tribute to George H. W. Bush by a real president who actually wrote it himself:

America has lost a patriot and humble servant in George Herbert Walker Bush. While our hearts are heavy today, they are also filled with gratitude. Our thoughts are with the entire Bush family tonight – and all who were inspired by George and Barbara’s example. pic.twitter.com/g9OUPu2pjY