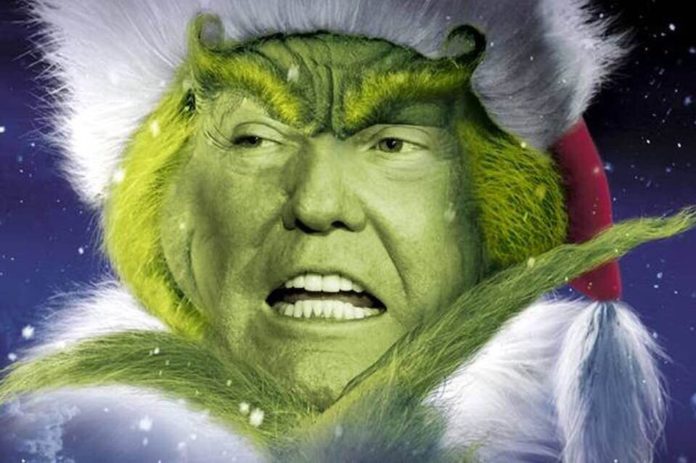 It’s not even December yet and President Donald Trump has already posted a Christmas message on Twitter, but Americans were not in the mood for his hypocritical holiday cheer.

In a post that does not appear to have been written himself considering the lack of grammar and punctuation errors, the inclusion of his family members and the general non-hostile tone, Trump wished the nation a “Merry Christmas” and “Joy to the world” to mark the 2018 National Christmas Tree Lighting.

On behalf of @FLOTUS Melania and the entire Trump family, I want to wish you all a very MERRY CHRISTMAS! May this Christmas Season bring peace to your hearts, warmth to your homes, cheer to your spirits and JOY TO THE WORLD! #NCTL2018🎄 pic.twitter.com/XNMJQ5JDSU

It certainly is a flip of tone considering Trump has been throwing tantrums all week, including attacks on Special Counsel Robert Mueller, Democrats, our allies and the press.

Clearly, he can’t possibly be wishing all Americans a Merry Christmas.

Regardless, Twitter users responded by giving Trump a holiday bird. Not a turkey, but the middle finger variety.

Christ doesn’t want to be associated with you.

Want the US to have the best Christmas ever? RESIGN, there will be dancing in the streets, Trump piñatas & fireworks sales will GO THROUGH THE ROOF.

I would enjoy the season a lot more if this happens 👇 pic.twitter.com/7pUecP9oqW

May this season bring your impeachment, which would in fact actually give us all peace.

Hahahaha hahaha who wrote this??! For real

Only you could turn Merry Christmas into a political statement.

All I want for Christmas is your impeachment. Or imprisonment, I’m good either way.

It’s not even December yet. And it should be “we” not “I”. But of course you only think of “yourself”.

If Trump really wants to give Americans a gift this holiday season he should resign, Until that happens, the only thing he is bringing to this country at this time of year is misery and depression.

But for now, at least we have holiday greetings from a real president to look forward to. After all, here’s what former President Obama wrote last year.

On behalf of the Obama family, Merry Christmas! We wish you joy and peace this holiday season. pic.twitter.com/CNFUZrhrBj

And here’s Obama’s Christmas message from his last year in office in 2016.

The best part of the holidays is the time we share with those we love. On behalf of Michelle, Malia, and Sasha, Merry Christmas everyone. pic.twitter.com/EznGyxluS8