The United States Blues
Home Health Twitter Rips Trump Apart For Bragging About His Building And Not Acknowledging... 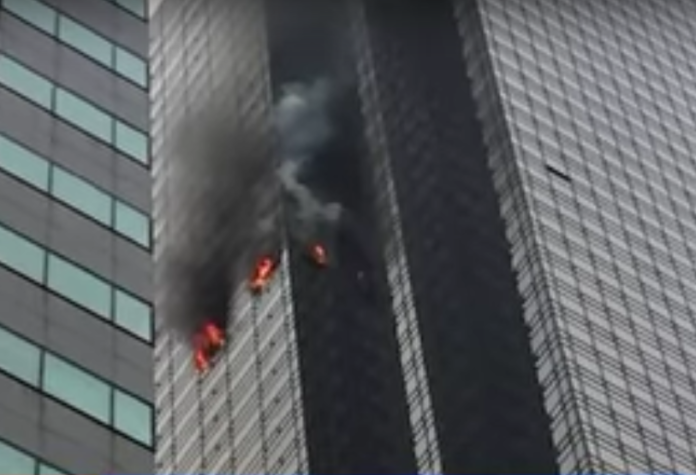 President Donald Trump heartlessly ignored the fact that a person died in the Trump Tower fire in New York City on Saturday, choosing to brag about his building instead. And Twitter users gave him hell for it.

After the fire was extinguished, Trump thanked the firefighters who put out the blaze but had no words for the tenant who was tragically killed.

Trump also bragged about how well the building was constructed.

Fire at Trump Tower is out. Very confined (well built building). Firemen (and women) did a great job. THANK YOU!

Of course, the flames may not have been so bad had Trump not been grandfathered into a law from 1999 law requiring high-rise buildings have sprinkler systems that exempted his building.

“Landlords and developers like Donald J. Trump have lobbied against sprinklers as unnecessary and expensive, costing up to $4 per square foot, or thousands of dollars for each apartment.”

In short, Trump’s building was not as “well built” as he claims. And the sprinklers were clearly necessary.

Supporters of the law cited:

“A 1995 study by the National Fire Protection Association suggesting that sprinklers cut fire deaths by half and property damage by two-thirds.”

Even then, Trump did not care about the facts, and one person is dead and others injured because of his refusal to make his own building safe. Not to mention that this is the second fire in Trump Tower to happen in 2018.

But even on Sunday morning, Trump still had not expressed any sympathy for the victim, choosing instead to whine about Hillary Clinton again, which drew the ire of Twitter users.

You sound as though you built it with your own (tiny) hands.

Your lack of self awareness and empathy for the man who died and the firefighters who were injured, because you did not install sprinklers, is truly astounding.

Although sprinklers have been legally required in skyscrapers since 1999, Trump actively lobbied against that law. He pays fines every year rather than install sprinklers.

A person died, you magnificent piece of excrement. Not a word?
Now, more than ever, you deserve the flames of hell.

Could you imagine tweeting about a fire in your building, and rather than express sympathy for the fatality and the injured FFs-you talk about how well-built the non-sprinklered building is?

Here, let me break this down for you: a normal well-adjusted human being would have been up all night, beside themselves, unable to think of anything else because of the injuries and death that occurred on their watch. You are still tweeting about an election opponent who lost.

a man died in your Reichstag fire and you never offered sympathy .you evil man

A man died in the fire at Trump Tower, and instead of sending your thoughts and prayers to them you’d rather brag about how well-built the building is (it isn’t). You are the definition of heartless and selfish!

Trump should be ashamed of himself for ignoring the death of one of his own neighbors. This is callousness on a level that no human being should be capable of, but only he could care more about a building than a human life.