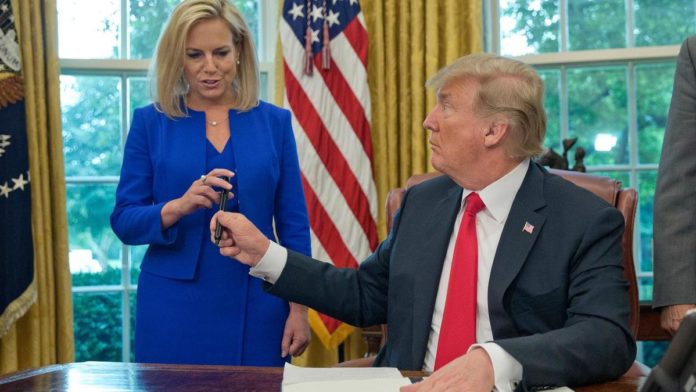 On Sunday evening, President Donald Trump fired the Secretary of Homeland Security (DHS), announcing that she was leaving the administration as he so often does: Via Twitter:

Secretary of Homeland Security Kirstjen Nielsen will be leaving her position, and I would like to thank her for her service….

Though the White House tried to paint Nielsen’s departure as a resignation, that turned out to be little more than a weak cover story, CNN reports:

Nielsen did not resign willingly, a person close to her told CNN, but was under pressure to do so. Nielsen did not fight nor grovel to keep her job, the source said. Nielsen should be staying for a week of transition, another White House official said.

And Julia Ainsley of NBC News noted that Nielsen was shown the door because Trump was angry and frustrated he hadn’t been able to close the U.S.-Mexico border as he threatened to do several times this week:

Senior US official says Nielsen was asked to the WH after a week of Trump’s frustrations, including over not being able to seal the border. It was up to her to convince him to keep her.

Make no mistake, Nielsen will not be missed by the vast majority of Americans, and she oversaw one of the most horrific actions carried out by the Trump administration: Separating migrant children from their parents and placing them in interment camps reminiscent of the ones this country used to imprison Japanese Americans during World War II.

Social media didn’t forget Nielsen’s ignominious reign at DHS, and she was harshly criticized on Twitter:

Kirstjen Nielsen was horrible as Secretary of Homeland Security. She’s horrible as a human being and should have been gone a long time ago.

.. but don’t get too excited about the news. Trump wants to replace her with someone who will be even more cruel and inhumane.

Secretary Kirstjen Nielsen is about to resign.

She plans to work in the private sector of putting children in cages.

I am well past the point of devoting energy to the transitional events in the Trump Admin’s uninterrupted terribleness.

Kirstjen Nielsen was terrible. Her replacement will be terrible.

The terribleness is the thing that matters.

Never forget that Kirstjen Nielsen blamed the death of a 7-year-old migrant girl in U.S. custody on her family.

There is a special place in hell for Nielsen.

She should be in fucking prison along with anyone else involved in these crimes masquerading as policy
RT @davidcicilline: Secretary Nielsen needs to resign. She has the power to stop this cruel policy. She lied about it consistently over the past few days.

Imagine. Kirstjen Nielsen ripped children from their mothers and she was not sufficiently cruel to immigrants for Trump. https://t.co/GmuE3LJadi

This woman is an absolute monster, and I’ll remind her constantly because I’m a petty brown bitch.

Kirstjen Nielsen will always be known as the woman who stood by and pretended nothing was happening as babies were kidnapped into concentration camps, and so yet another Trump flunky leaves the administration unemployable and with her reputation in tatters, well played, Kirstjen