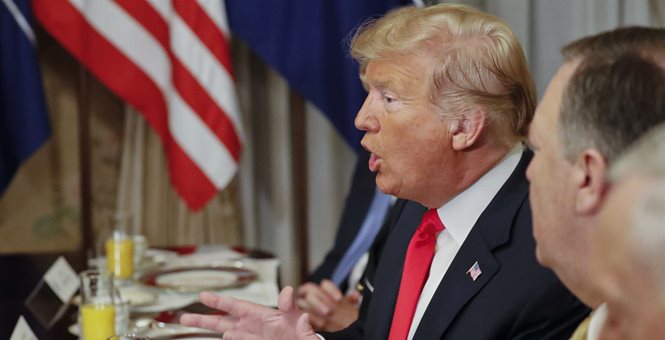 President Donald Trump just won’t stop trying to blame Democrats for his inability to get his nominees approved in the Senate.

On New Year’s Eve, Trump lashed out at Senate Minority Leader Chuck Schumer and accused him of obstructing his ambassador nominations, even going so far as to claim that other nations are calling him to complain about Schumer.

Heads of countries are calling wanting to know why Senator Schumer is not approving their otherwise approved Ambassadors!? Likewise in Government lawyers and others are being delayed at a record pace! 360 great and hardworking people are waiting for approval from….

….Senator Schumer, more than a year longer than any other Administration in history. These are people who have been approved by committees and all others, yet Schumer continues to hold them back from serving their Country! Very Unfair!

It turns out that Trump has made this accusation before, so he is recycling his tweets.

And he did it again on Tuesday by once again blaming Senate Democrats for his nominees not being approved fast enough.

For FAR TOO LONG Senate Democrats have been Obstructing more than 350 Nominations. These great Americans left their jobs to serve our Country, but can’t because Dems are blocking them, some for two years-historic record. Passed committees, but Schumer putting them on hold. Bad!

The problem is that Democrats don’t have the majority, Republicans do. And since it only takes 51 Senate votes to approve an ambassador nominee, Trump should be blaming Republicans because they literally have 51 votes in the Senate to do the job.

In short, this is not on Democrats, and Twitter users proceeded to school him for repeating such a demonstrable lie.

There are 1,242 Presidential Appointments that require Senate Approval

About 700+ are Key Positions

126 of that 700 HAVEN’T EVEN GOT A NOMINEE FROM THE ADMINISTRATION.

DEMS DO NOT CONTROL SENATEhttps://t.co/L1psbXca0z

The President Doesn’t Really Seem to Understand how Math or Government Works.

There are 100 seats in Senate.

Republicans control 51 soon to be 53.

It only takes 50 Votes to confirm nominee.

See all that Grey!

Those are the key positions which don’t even have a nominee from the administration!

See all that turquoise…

Those are the nominees which the GOP CONTROLLED SENATE HAS APPROVED!

Fox news article “This is a lie. Because: a. The problem isn’t a long list of unapproved ambassadors. It’s that Trump left the most important slots vacant for virtually his entire first 2 years (eg Saudi Arabia) b. Ambassadors need only 50 votes. Mitch, not Chuck, is the issue,”

9 of your first 20 nominees confirmed to their positions have either resigned or were fired. Keeping up with a replacement rate of nearly 50% also makes it difficult to maintain staffing.

Schumer isn’t charge of the Senate. You should talk to the 🐢.

For 14 countries, Trump hasn’t even bothered nominating an ambassador (including several countries that are geopolitical priorities). For those awaiting confirmation, their approval only requires a simple majority, so Republicans can confirm them without a single Democratic vote. https://t.co/DfsrIi9npH

And Trump better not even think about blaming Senate Democrats when the new session of Congress begins on Thursday. Because Republicans will have 52 votes in the Senate this time.