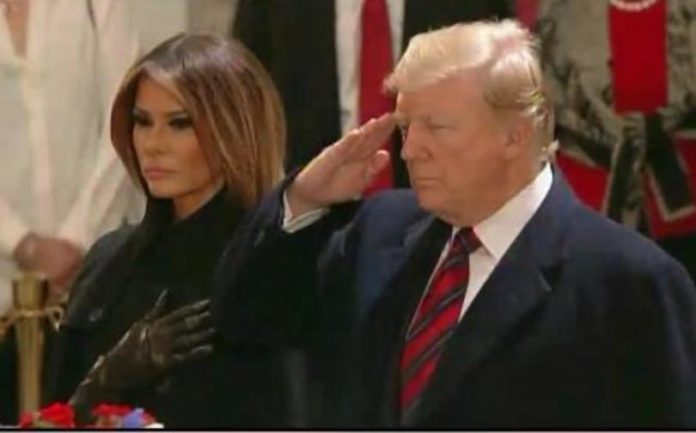 President Donald Trump made a brief visit to the Capitol Rotunda on Monday evening where the body of former President George H.W. Bush lies in state.

Though Trump initially looked uncomfortable, he stood next to First Lady Melania Trump and raised his right hand to salute the late president Bush, who served honorably as a Navy fighter pilot in World War II. Trump, on the other hand, avoided service in Vietnam by getting five medical deferments due to “bone spurs” in his feet.

Within minutes of Trump’s salute, Twitter erupted with anger and contempt for Trump. Many of those who commented mentioned that the current president had dodged serving his country and didn’t have the right to salute anyone, especially a war hero like Bush:

Why the salute? And last I checked the thumb doesn’t curl into the hand during a salute, inappropriate or not. Fail.

He looked as bored as he would watch the grass grow. He’s sitting there swaying back and forth, closing his eyes as if saying “God I wish I were anywhere else!” Then that salute. Still playing Cadet Bonespurs.

Watching trump surrounded by all the military personnel is so offensive. He doesn’t deserve any hand salute.

He’s a coward who ran from service. He disrespects our great servicemen and women regularly. He doesn’t get to salute anyone.

I hope his bone spurs don’t flare up after that salute.

A fraud salutes a hero.

So uncomfortable to watch. The fidgety stance, his facial expression, phony solace and then that salute. The only highlight of his visit was his verbal silence. #BushFuneral

Christ. Watching him salute makes me feel like vomiting.