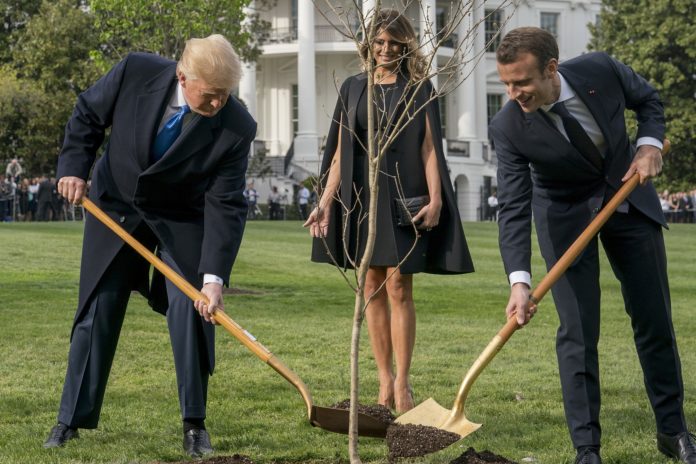 When French President Emmanuel Macron arrived at the White House Monday for his first official state visit since President Donald Trump was elected, he brought a gift for the American head of state: A young European sessile oak tree, which the two men proceeded to plant on the grounds of the White House.

The tree has special historical importance, as the Huffington Post noted:

“It came from Belleau Wood, some 60 miles northeast of Paris, which was the site of a World War I battle where more than 9,000 American Marines died in combat.”

But to see climate change denier Donald Trump planting a tree was too much for many on Twitter, and if the president took time to read their barbs, he must have been enraged. Take a look at a few of the best postings:

Macron bringing Trump a tree as a gift is the PERFECT way to troll him over leaving the Paris Climate Agreement. pic.twitter.com/GhfRDgBTIy

I threw a Jellybean into the hole when no one was looking so I can grow a Jellybean Tree. Smart! #Trump #Macron #MAGA pic.twitter.com/vJ0KJ75PrO

Scott Pruitt and Ryan Zinke to follow with Trump Administration’s Ceremonial Chopping Down A Tree Then Lying About It. https://t.co/pjPZiUNY6w

Trump was probably fuming about being given a tree instead of something gold or gem-encrusted. Brilliant trolling on Macron’s part.

A tree was planted today on the SL.

Staff: Sir, Macron would like to plant a tree before the state dinner.
Trump: Why?
Staff: Because we just had Earth Day.
Trump: Fine. Pick a spot. Just make sure my shovel is gold.

Tree: Someone save me! Trump is sending Pruitt to kill me! pic.twitter.com/gPG5r0hDzw

It remains to be seen if Trump will allow White House groundskeepers to give the tree any water.