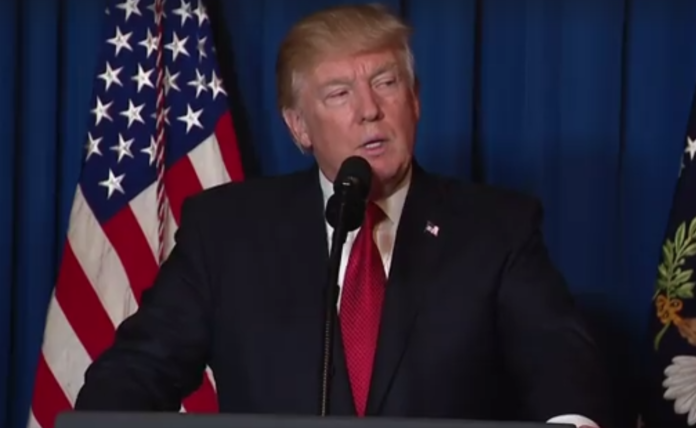 President Donald Trump is still desperately touting the global trade war he caused by slapping tariffs on multiple nations, including our own allies, despite the fact that they are hurting American workers and businesses across the country.

For months, Trump’s has been obsessed with using tariffs to punish nations over what he believes are unfair trade deals and trade deficits. But the tariffs backfired because those nations have retaliated with tariffs of their own and refusal to purchase American products.

Farmers have been especially hit hard as China refuses to purchase soybeans and other agricultural products from the United States, causing prices to fall to record lows, resulting in many farmers struggling financially.

Regardless of the economic disaster Trump is ushering in, he chose to tout the tariffs on Tuesday in lie-filled tweet claiming that billions of dollars are flowing into the country and that jobs and businesses will somehow flourish.

Billions of dollars are, and will be, coming into United States coffers because of Tariffs. Great also for negotiations – if a country won’t give us a fair Trade Deal, we will institute Tariffs on them. Used or not, jobs and businesses will be created. U.S. respected again!

But that’s not the case as the tariffs have negatively impacted workers and businesses in several states, especially red states.

Harley-Davidson recently had to move production overseas because of the tariffs and Ford is planning to lay off workers. And that’s the tip of the iceberg that is cutting a gash into the American economy.

Twitter users were quick to shoot down Trump’s lies.

All I see is money pouring out of the country because of your tariffs. The market is down because of them, businesses are moving, closing and laying people off. You truly suck as a businessman and a so-called @POTUS. You’re also demented. Resign. #VoteBlueToSaveAmerica

Weird, the stock market has lost well over a thousand points in the last couple of weeks. Milk increased 50 cents more than last week, gas just went up 10 cents and don’t get me started on mortgage interest rates!

JUST IN: The President of the United States sees his tariffs as having the effect of causing billions of dollars to come into “United States coffers,” rather than as the tax on consumers that they actually are. It is unclear how he graduated from Wharton without passing Econ 101. pic.twitter.com/kvmAxgUKOp

Ask small farmers who didn’t benefit from your welfare bailout how respected they feel.

Tarriffs are a tax that the people pay. You just said that many billions of tax payers dollars will be in your coffers. This makes absolutely no sense. Seek out free trade agreements instead punishing Americans.

Tariffs don’t come back as jobs…tariffs result in HIGHER PRICES for goods!!! And salaries are NOT rising, hence we can no longer afford any goods regardless of origin!!!
Repeal your #TAXSCAM 84% of the benefits go to the Upper 1% and multi-national corporations!!! LYING MONSTER

FALSE! They are causing jobs to be lost & plants to get shut down. FORD is an excellent example! How about Harley-Davidson?? Your tariffs are causing cars all the way to a can of soda to be more expensive tariffs were NEVER meant to be anything except a weapon to use as you wish.

Another disadvantage of tariffs is that other countries retaliate. They raise tariffs on similar products to protect their domestic industries. That leads to a downward economic spiral, as it did during the Great Depression of 1929.

The latest round of tariffs could lower annual GDP growth by about 0.7 percent, according to Oxford Economics chief U.S. economist Gregory Daco.

Trump inherited a booming economy from former President Barack Obama, and he has spent much of his presidency trying to sabotage that success while taking credit for it as his own achievement. But when the economy inevitably falls into a recession under his watch because of his economic irresponsibility, will Trump still take credit, or will he just blame Obama or someone else for his mess?

We all know the answer to that question.