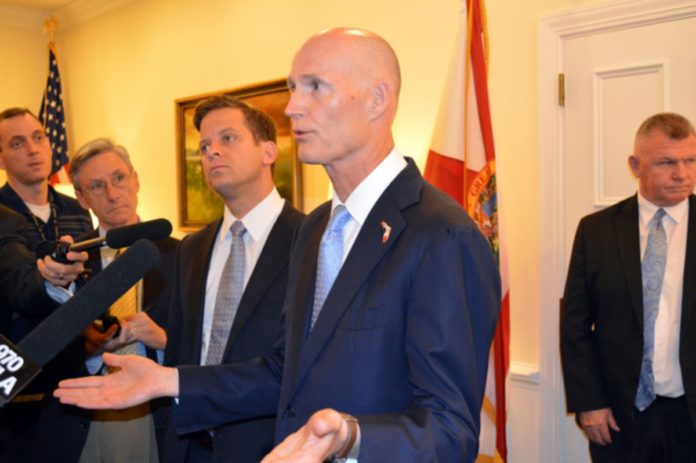 President Donald Trump praised Florida Governor Rick Scott, who is running for the U.S. Senate, as a “great” governor on Saturday morning in a rant that included an attack on Democratic gubernatorial candidate Andrew Gillum.

Both Gillum and Democratic incumbent Senator Bill Nelson are running in tight races against Republicans Scott and Ron DeSantis in Florida this year, with Gillum holding a slim lead while Nelson’s race is currently tied according to an average of the polls.

DeSantis’ racist ties and Scott’s disastrous governance have hindered their campaigns, so Trump decided to step in on Saturday with a tweet that did neither of them any favors:

Rick Scott is known as easily one of the best Governors in the USA. Florida is setting records in almost every category of success. Amazing achievement-the envy of the World. Ron DeSantis will build on this success. His incompetent opponent will destroy Florida – next Venezuela!

Twitter users were quick to pounce on Trump’s praise of Scott by pointing out his failures, which include the red tide that has devastated the Florida coastline:

Rick Scott allowed old people to die in their rooms at a nursing home that was across the street from a hospital after Hurricane Irma.

The staff called his office, pleading to save their patients.
His office said help was on the way.
It never came.https://t.co/hBeBpltY3o

Climate change hits Florida at first and hard. Rick Scott does nothing against it. Vote Bill Nelson.

“The envy of the world” pic.twitter.com/StYapfRD2D

Except DeSantis is behind in the polls because Floridians know their state will soon be under water if we keep electing Republicans to office.

I know you’ll never read this or respond but why can’t you just support someone without personal attacks on the opposition? I don’t understand the rhetoric that your administration promotes. I’m a lifelong republican who is ashamed by this behavior. Please do better.

Rick Scott is literally poisoning millions of Floridians with red tide, and wants to make it worse by fracking the Everglades https://t.co/SMoiXQguxG

Florida has $22.1 billion in debt and ranked 40th in education. If this equals one of the best, you’re an idiot!!!

It should also be pointed out that calling Gillum “incompetent” could be interpreted as racist. Gillum is black, and conservatives have used his skin color to argue that he isn’t smart enough to be governor. Trump’s insult exposes his hypocrisy since he and his family have frequently accused Democrats of being uncivil.

Furthermore, Trump has been claiming that every Democrat will turn their state into the “next Venezuela” as if he himself isn’t turning the United States into a third world dictatorship. And let’s not forget that Republican led states lead the country in poverty and lack of education, not to mention lack of healthcare.