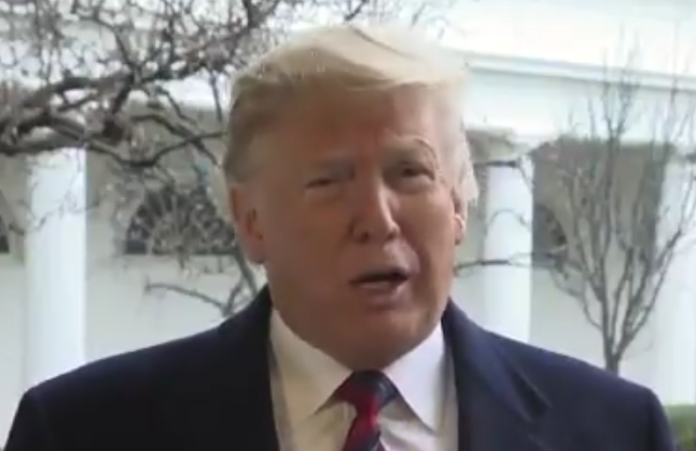 President Donald Trump whined about Americans partying to celebrate the New Year while he is stuck at the White House working instead of at his Mar-a-Lago party.

Ever since Trump shut the government down, he has been forced to stay in Washington, first over Christmas and now the New Year.

He had planned a big taxpayer funded gala at his Florida resort, but he doesn’t get to go.

Of course, First Lady Melania Trump will be happy about that, but Trump appeared to complain in a video while seemingly shaming everyone who gets to party.

“While I’m at the White House working, you’re out there partying tonight,” Trump sulked in a very brief video. “But I don’t blame you. Enjoy yourselves, we’re going to have a great year, have a really, really happy New Year.”

Trump has nobody but himself to blame for not getting to go to his Mar-a-Lago party to celebrate the New Year. After all, the Senate had unanimously passed a continuing resolution to fund the government through early February, but he rejected it because it didn’t include wall funding.

As a result, he followed through on his threat to shut the government down, which caused Trump to stay in the nation’s capital through the holidays.

It’s rather petty for Trump to be bitter about Americans going out to enjoy themselves with friends and family. Instead of throwing shade, he should have simply wished everyone a happy New Year and signed off.

And it’s not like Trump is the only one working. That is, if he’s not lying about that like he lied about being in the Oval Office earlier in the day. Police officers, journalists, doctors and our soldiers are among those who are still doing their jobs. Only they are making a difference in people’s lives, something Trump will never do.

In fact, Trump spent the next several hours rage tweeting and ranting on Fox News. That’s not working.

Also, if 2019 is anything like 2018 or worse, Americans won’t be having a happy New Year, unless Special Counsel Robert Mueller prosecutes Trump or Congress impeaches him. Americans have been increasingly unhappy and stressed over the last two years, and that’s probably because of Trump.

2019 certainly isn’t starting off right what with an ongoing government shutdown and a sliding stock market that had it’s worst December since the Great Depression. And that’s not to mention Trump’s trade wars, his surrender in Syria, his kowtowing to Russia, getting duped by North Korea, and the overall chaos Trump has created.

Want to make it a great new year? Step down

I’m pretty sure you aren’t the only one working… military… cops….walk into any hospital…. and they are actually helping ppl and making a difference

A few CNN anchors are still working too😂😂😂😂😂😂

It will be happy when you’re out of office#TrumpResign

Can’t even say Happy New Year without lying. Jesus, you suck at literally everything

Can you release something that doesn’t have you throwing shade or have you complaining in it? That would be great! Thanks!