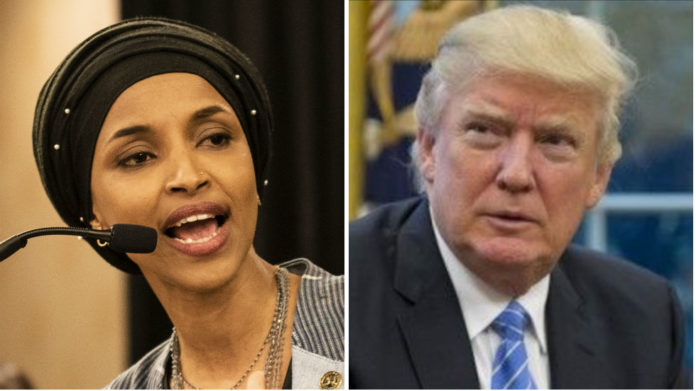 President Donald Trump posted an offensive propaganda video to his Twitter feed on Friday in an effort to smear Rep. Ilhan Omar (D-Minn.) and pretend that he cares about the September 11th terrorist attacks.

Omar delivered a speech to the Council on American–Islamic Relations (CAIR) this week in which she referenced the attackers who killed 3,000 Americans on 9/11.

“CAIR was founded after 9/11, because they recognized that some people did something and that all of us were starting to lose access to our civil liberties,” she said.

Now there is nothing inherently wrong with Omar’s statement, but Trump took her words out of context and posted a propaganda video portraying her negatively in an effort to make it seem like she doesn’t care about 9/11 or has forgotten about it.

WE WILL NEVER FORGET! pic.twitter.com/VxrGFRFeJM

The Washington Post has already reported on her speech by posting the context while Trump chose to focus on a few words.

Trump is also being a hypocrite considering his many truly offensive statements about 9/11, including once referring to it as 7/11. Clearly, he couldn’t even be bothered to remember.

Twitter users responded by reminding Trump of some his other offensive behavior and called him out for inciting violence against Omar, who has been receiving many death threats.

We all need to report his tweet for inciting violence. It is clear what his intent is.

Other Twitter users reminded Americans that Trump bragged about his building being the new tallest in New York after the World Trade center towers fell and that he took money from the government meant for people who suffered losses even though he didn’t lose anything that day. Trump would later also brag about his ratings being higher than 9/11 coverage.

Shortly after the attack, Trump claimed $150,000 from the government to cover “rent loss” and “repairs”. The money had originally been set aside for small businesses in the area.

In an interview about his first 100 days in the White House with the Associated Press, Trump boasted that his “ratings” on cable network shows like on Fox and CBS’s Face the Nation were higher than those for broadcasts of the 9/11 terrorist attacks.

Here is Trump despicably bragging on 9/11 that after the terrorist attack that killed nearly 3,000 people his building was now “the tallest” in New York City. Even on 9/11 he could only think of himself. Nothing is more vile than Trump #IStandWithIlhan pic.twitter.com/rEB3DqcUsN

You are a POS! She isn’t a terrorist , your supporters who run people over with cars and shoot up concerts are. You are so Islamophobic and racist. You bragged about your building being the tallest after 9/11. You at a sick man.#RacistTrump

You’ll never forget what? The day you bragged about how the attack meant you had the tallest building? Or the day you lied about seeing cheering Muslims (for which no evidence exists)? Or you mean your fake 9/11 charity contributions? What exactly is it you’re not forgetting?

You are using an EDITED version of a Ilhan’s speech out of context and you are going to get her killed!

WHAT THE ACTUAL F**K IS WRONG IN YOUR HEAD?

I also noticed you haven’t said a f**king word about the white man who burned 3 black churches to the ground. You miserable racist

A Twitter user who lost a friend in the attack also called Trump out.

Don’t use my friend’s death for your political purposes. He was a Firefighter. You make all of us less safe with your bilious bigotry. He was a hero and didn’t ask people about their religion or politics, he just saved them.

Trump should take this video down and apologize to the nation and to Omar.