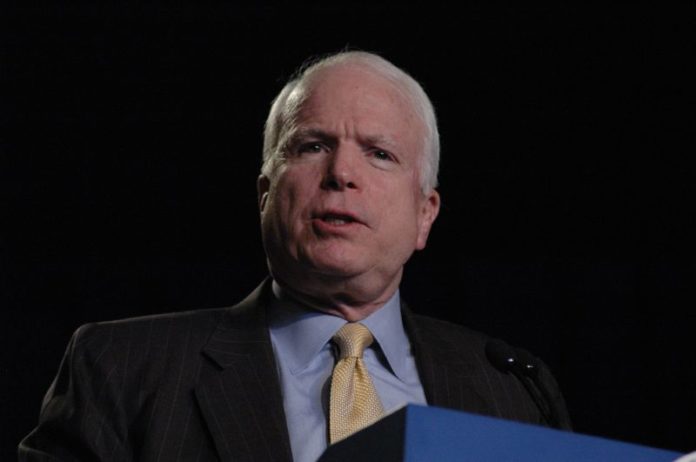 President Donald Trump degraded the office of the presidency again on Saturday evening by launching a vile attack against the late-Senator John McCain (R-Ariz.) on Twitter and at his MAGA rally, drawing a sharp rebuke from his critics and supporters.

Rather than say anything about the New Zealand mass shooting that took 49 lives on Friday or, you know, actually condemn hate and white nationalism, Trump peddled more hate by lashing out at McCain’s ghost for not voting to strip Americans of healthcare and for doing the right thing by turning the Steele dossier over to the FBI:

Spreading the fake and totally discredited Dossier “is unfortunately a very dark stain against John McCain.” Ken Starr, Former Independent Counsel. He had far worse “stains” than this, including thumbs down on repeal and replace after years of campaigning to repeal and replace!

McCain’s decision to vote against repeal of the Affordable Care Act came bravely after his diagnosis of brain cancer, which he sadly succumbed to late last year surrounded by his family. Also, parts of the dossier have been verified and McCain made the right decision to hand it over to the FBI. Plus, the FBI had more probable cause beyond the dossier to investigate Trump.

Twitter users, starting with Meghan McCain, fired back at Trump. And even some of his supporters rebuked him:

No one will ever love you the way they loved my father…. I wish I had been given more Saturday’s with him. Maybe spend yours with your family instead of on twitter obsessing over mine? https://t.co/q7ezwmHiQ4

John McCain was a great American, Mr President. He is also dead.
So this tweet is extremely distasteful & unnecessary. https://t.co/kZgH2362ms

Even though he’s dead, I’d still back John McCain over you in a fist fight, you fucking yellow bellied clam. https://t.co/qIFZJ0Vie1

@LindseyGrahamSC , how do you live with yourself??? How? John McCain isn’t here to defend himself. Your silence desecrates his memory. https://t.co/w4sO5WYcJs

You’re completely obsessed with McCain because you’ll never be half the man he was.

John McCain has been dead for almost seven months. Donald Trump attacked him with a tweet today.

The President of the United States has nothing to better to do with his time. What a sad, little man he is. https://t.co/FQn5amM494

Actually, John McCain chose the most responsible course of action. He was given the dossier by a credible source: he didn’t leak to the press, sit on it or try to get any political leverage for it. He gave it to the FBI to investigate. https://t.co/41PrWQrRZ8

John McCain had toenail clippings with more class, compassion and integrity than you, Donny. You will go down in history as the most awful human being ever to sully the WH. #TrumpRussia

In a hundred years, John McCain will still be a national hero. You’ll be a joke and a source of American shame until the sun is a darkened cinder. https://t.co/fIzLeFHi2L

John McCain is still owning you and he’s not even alive. https://t.co/zGlesvANal

This is yet another sad day for America as Trump continues to destroy common decency. He is so petty that he can’t even let McCain rest in peace. He feels the need to attack his corpse every chance he gets. McCain can’t fight back, but the rest of us can and should with every fiber of our being. Now the only question is where the hell is Senator Lindsey Graham (R-S.C.)? After all, a true friend would not tolerate this insult of McCain’s memory.