The United States Blues
Home News Tyranny expert and historian warns that America is about to lose the... 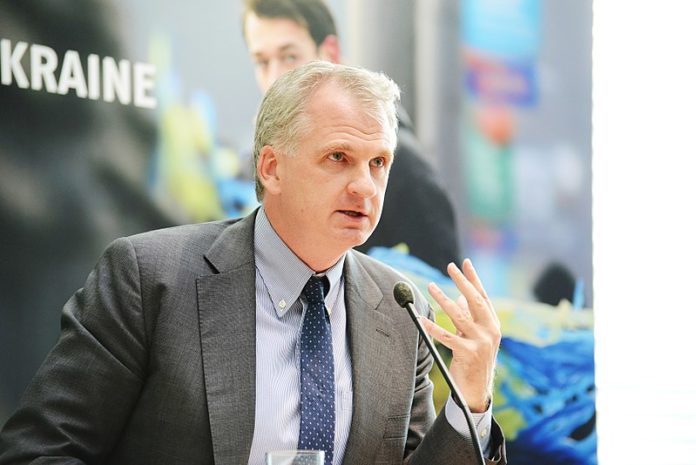 Authoritarianism expert and historian Timothy Snyder issued a startling warning this week during an interview that America is in serious danger of losing the Constitution if President Donald Trump is not stopped.

Two years into Trump’s presidency and our democratic institutions are still standing despite his best effort to weaken them in his quest as a wannabe dictator. However, our democracy won’t be able to take the stress forever and that’s why Snyder is warning that the Constitution is at risk of being lost if the American people don’t don’t resist even more than they have already.

After Slate asked what behaviors he has seen that stand out as signs things are worse than previously thought, Snyder ranked the media as his top concern.

“I guess the main thing would be media normalization,” Snyder said.

“On the one hand, the New York Times and the Washington Post have been sharp for the most part. They seem to recognize what the stakes are. What I find interesting about them and about a bunch of other outlets is that people call them the mainstream, but they’re totally not the mainstream anymore,” he responded. “Of course, CNN speaks in many voices. Fox does too for that matter, but in general, people who work in television media have a hard time getting out of the daily cycle and therefore their tendency is very strongly to normalize. To imagine that whatever happened today is somehow OK. That, I think, probably has to change…You’ll see moments on television where something very strange happens, but they just normalize. That’s probably the thing that worries me the most.”

Trump has spent much of his presidency attacking the media as the “enemy of the people” and has bombarded the nation with lies and despicable behavior that has been normalized just because of the repetition.

Historians also recently ranked Trump’s administration as the most scandalous in history, which causes more normalization by the media because the scandals are becoming gradually worse and worse and people are no longer as shocked.

Snyder also said that Americans can’t wait for Republicans to save us from Trump and that’s the Constitution could be overthrown.

Except that Republicans have demonstrated time and time again that they don’t care at all. Even Trump’s own supporters are still solidly behind him regardless of what he does.

Republicans let Trump declare an unconstitutional national emergency to usurp Congress’ constitutional power of the purse. Sure, a few will vote for a resolution of opposition but Trump will just veto it and Republicans will refuse to override him.

And that national emergency declaration actually gives Trump the power to declare martial law, have his political opponents and critics arrested, shut down the media, and even cancel elections.

Americans also can’t expect our legal system to save us either since Trump has launched constant assaults on the rule of law in an effort to break the FBI and Justice Department.

In the end, Snyder explained that if the American people are to stop Trump, they have to fight back like never before.

“In order for this to be stopped, there has to be unconventional activism,” he said. “Americans have to do the kind of things they haven’t been used to doing because the system that we’re used to is now precisely in question. The Democrats also have to resist. That’s a necessary but not a sufficient condition. There has to be the conventional resistance. Then some elements of the Trump electorate have to shift. Maybe not most of it, but some of it has to realize that OK, this wasn’t just a symbolic moment.”

And that’s going to be tough considering Trump supporters treat him like a god who has done no wrong. His supporters are so brainwashed they ask him to sign their Bibles and reject every scandal as “fake news.”

Impeachment is clearly off the table because Republicans control the Senate and don’t care what crimes Trump has committed. So it’s really up to the voting public to oust Trump from office in 2020, but that’s assuming he leaves voluntarily when he loses. At that point, if Republicans still refuse to act, more extreme measures may be necessary to ensure our Constitution and democracy survives. Let us hope it doesn’t reach that point.