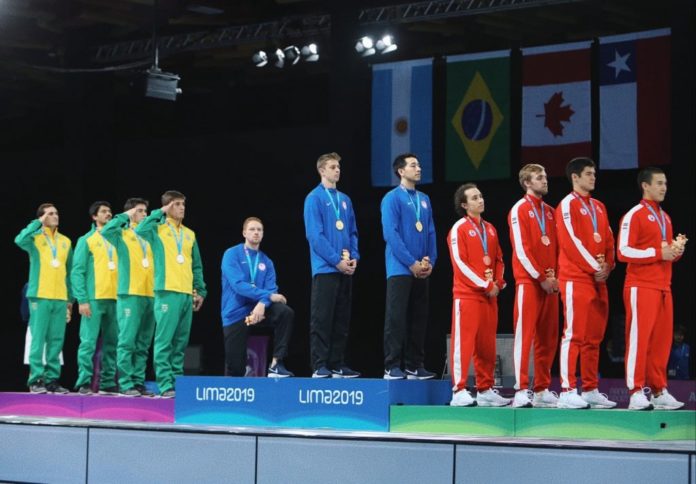 In defiance of President Donald Trump’s demand that athletes stand during the national anthem, American gold medal fencer Race Imboden took a knee on the podium to protest Trump’s hate and to bring attention to social justice issues.

Imboden has been competing in individual and team fencing events at the Pan American Games in Peru, capturing the bronze in his individual event while he and his teammates scored a gold medal victory in the team event.

As is tradition, the team took their place at the top of the podium and received their gold medals. But when the Star Spangled Banner played, Imboden refused to remain standing, using the moment to protest injustice and racism by kneeling.

Imboden would explain his decision on Twitter by calling for a change in the United States, not only to stop racism but to enact gun control and end the persecution of immigrants. He even called out Trump.

We must call for change.
This week I am honored to represent Team USA at the Pan Am Games, taking home Gold and Bronze. My pride however has been cut short by the multiple shortcomings of the country I hold so dear to my heart. Racism, Gun Control, mistreatment of immigrants, pic.twitter.com/deCOKaHQI9

and a president who spreads hate are at the top of a long list.
I chose to sacrifie my moment today at the top of the podium to call attention to issues that I believe need to be addressed. I encourage others to please use your platforms for empowerment and change.

Imboden’s protest comes in the wake of a mass shooting in El Paso that killed 22 people by a white nationalist incited by Trump’s racist and violent rhetoric against migrants. Trump also recently attacked Democratic lawmakers of color by telling them to “go back” where they came from.

This latest instance of an athlete taking a knee in protest during the national anthem is a continuation of protest started by NFL quarterback Colin Kaepernick, whom Trump has viciously attacked and accused of disrespecting the flag and the troops even though kneeling has nothing to do with either, except for the fact that a veteran advised Kaepernick to kneel instead of sitting as he had originally planned.

Trump is a disgrace to our nation and after the last month our country has experienced, it’s time we all kneel in protest until Congress impeaches him or we vote him out in 2020. Because it’s time to enact the kind of change that will enrage racists to their core so that our country can finally move forward into a better future for everyone.