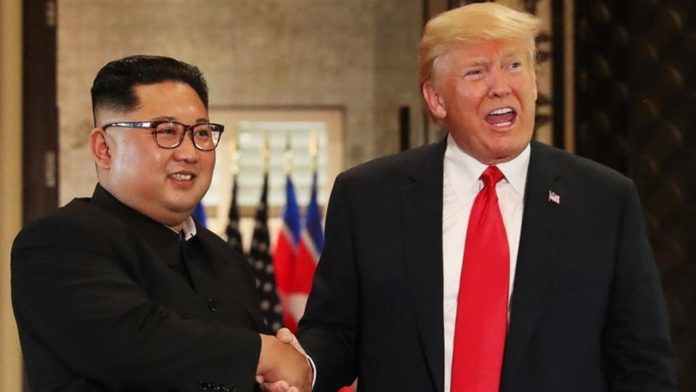 Analysts with the U.S. Defense Intelligence Agency (DIA) believe that North Korea has produced at least 12 nuclear weapons since President Donald Trump met with North Korean leader Kim Jong Un for their first summit in Singapore, according to The Wall Street Journal:

In all, analysts believe that North Korea now possesses between 20 and 60 nuclear bombs.

Not long after the first summit between Trump and Kim, the president declared that North Korea was no longer a threat to the United States. He has repeatedly said the same thing when asked about the security situation on the Korean peninsula.

The Journal report also comes on the heels of news that North Korea launched two short-range projectiles, The Hill notes:

On Friday, Trump said he’s not concerned by North Korea’s latest missile test, and repeatedly downplayed the projectiles as “short-range” while touting his relationship with the North Korean leader.

Trump has defended the North Koreans no matter what actions they take regarding their nuclear and missile programs. In February, the president remarked:

In May, Trump doubled down on his comments, saying that he has “confidence that Chairman Kim will keep his promise to me.”

Though Kim and the North Koreans may not be testing long-range rockets or nuclear weapons, they are clearly continuing to move ahead with their nuclear program, meaning they remain a threat to the United States and our allies in the region.

Donald Trump has been duped, but he’s far too heavily invested in his “love” of Kim admit it.