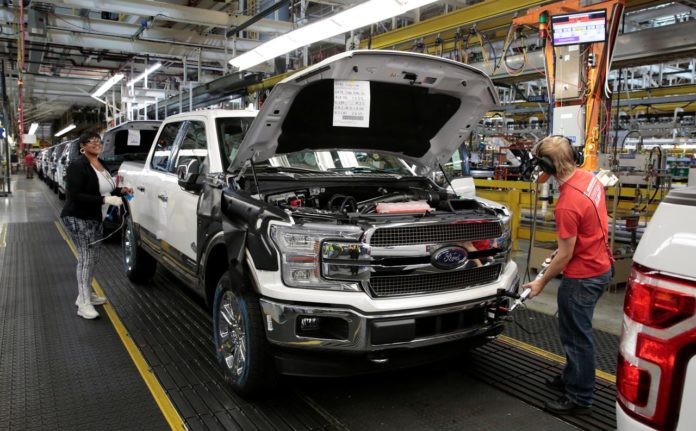 Manufacturing in the United States is officially in a recession after two straight quarters of decline, and President Donald Trump’s ongoing trade war is being blamed for the downturn, according to a new report from Agence France-Presse (AFP):

The decline comes as the United States enters its 11th year of economic recovery and occurs despite Trump’s constant pledges to restore America to manufacturing greatness — even though services now drive three quarters of the US economy.

Despite jumping in June, manufacturing fell by a 2.2 percent annual rate in the April-June period, and total industrial production lost 1.2 percent, in both cases the second consecutive quarterly decline, the Federal Reserve said Tuesday.

When he ran for the presidency in 2016, Trump repeatedly promised to bring back manufacturing jobs and revitalize industries that had been on the decline for decades.

Oddly, the bad numbers on manufacturing come at a time when demand for goods is increasing:

The retreat comes even as American consumers are sustaining their appetite for spending pushing retail sales higher for the fourth straight month, as shoppers in June took home more new autos and furniture and dined out more frequently.

Manufacturing jumped 0.4 percent compared to May, while total industrial production showed no change, according to the Federal Reserve report, confounding economists’ expectations for a 0.2 percent gain.

A continued uptick in demand while production holds steady or declines could cause inflation. And that could lead to a wider, nationwide recession.

The bad manufacturing numbers suggest that the Federal Reserve may raise interest rates slightly, but that too has risks and could also lead to a recession. Ian Shepherdson of Pantheon Macroeconomics believes cutting rates would be a mistake:

“To cut rates now because of the recent weakness of manufacturing is a mistake, in our view, because monetary policy works with long lags, and easing in H2 will be supporting growth next year.”

Trump is counting on a strong economy to carry him to reelection in 2020, but if he doesn’t end his trade war soon, those plans could evaporate.