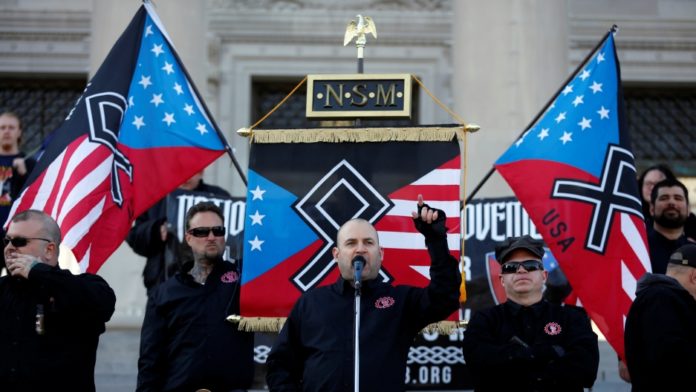 An official with the U.S. State Department has working secretly as an organizer for white nationalist/supremacist groups online, according to a new report from the Southern Poverty Law Center’s Hatewatch:

The official, Matthew Q. Gebert, works as a foreign affairs officer assigned to the Bureau of Energy Resources, a State Department spokesperson told Hatewatch. Online, and in private correspondences with other white nationalists, Gebert uses “Coach Finstock” as a pseudonym. Through that alias, he expressed a desire to build a country for whites only.

“[Whites] need a country of our own with nukes, and we will retake this thing lickety split,” “Coach Finstock” said on a May 2018 episode of “The Fatherland,” a white nationalist podcast. “That’s all that we need. We need a country founded for white people with a nuclear deterrent. And you watch how the world trembles.”

Gebert first joined the State Department in 2013, and a posting he made on a forum entitled “The Right Stuff” says he became radicalized around 2015, two years after joining the chief diplomatic agency for the U.S. government:

“I got into this [movement] and off the conservative reservation in 2015,” he wrote in a January 2018 thread called “Ricky Vaughn is a N*****faggot who has no place in [The Right Stuff],” which referred to the pseudonymous identity used by an internet personality in the white nationalist “alt-right” movement.

Gebert also expressed concern that if his dark secret was ever uncovered, he could well be fired from his job:

“There are bigger things than a career and a paycheck, and I don’t want to lose mine,” Gebert said as “Coach Finstock” on an episode of “The Fatherland” recorded in August 2017, referring to his commitment to white nationalism. “I am prepared to lose mine. Because this is the most important thing to me in my life … in tandem with my family, of course.”

Gebert also allegedly attended the infamous “Unite the Right” rally Aug. 12, 2017, in Charlottesville, Virginia, and later had this to say about the event:

“I came back in one piece. Un-doxxed. Knock on wood,” Gebert said as “Coach Finstock,” referring to the fact that he managed to avoid being identified in the crowd. “Un-arrested. Just with some mild war wounds that frankly I’m kind of proud of.”

Contacted by Hatewatch for comment, a State Department spokesperson said the agency was:

“Committed to providing a workplace that is free from discriminatory harassment and investigates alleged violations of laws, regulations, or Department policies, taking disciplinary action when appropriate.”

Meanwhile, Gebert continues to draw a government salary financed by your tax dollars.