The United States Blues
Home National News U.S. Troops Sent To Border Will Not Get To Share Thanksgiving With... 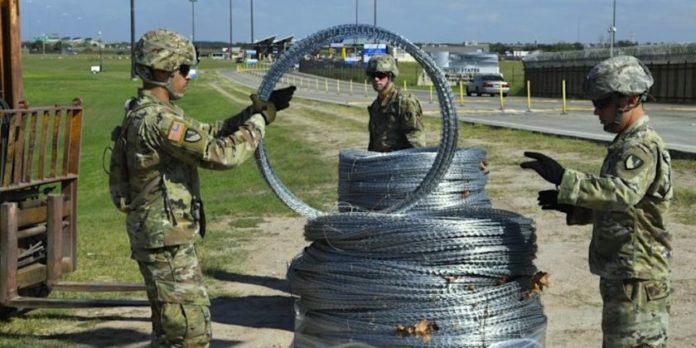 Thousands of U.S. military personnel deployed by President Donald Trump to the U.S.-Mexico border in the days leading up the midterm election will not get to spend Thanksgiving with their families, according to The New York Times.

The troops were sent to the border for the purpose of repelling what Trump called an “invasion” of immigrants from Central America in a caravan. Many critics accused the president of using scare tactics to turn out his base supporters in the midterm, which saw Republicans lose control of the House of Representatives by the largest margin since the Watergate scandal.

At Base Camp Donna, troops have almost no access to electricity, time-limited showers, and no air conditioning even though temperatures in the region are said to be sweltering.

What exactly are the troops doing to prevent the caravan from getting to the United States? HuffPost reports:

“The soldiers spend their time trying to make the outpost livable, according to the Times. They play cards and take turns charging their electronic devices. They build barbed wire fences. There’s no mess hall or access to hot food, so instead they eat prepackaged meals.”

Prepackaged turkey and dressing sure sounds delicious, doesn’t it? All so an egomaniac can pretend to be tough as a political stunt.

Senator Brian Schatz (D-HI) slammed Trump for the deployment and urged him to let them go home for the holidays:

Deploying troops to our own border for no national security reason is one of the biggest scandals of this Presidency. These dedicated, skilled, highly trained men and women will likely miss Thanksgiving w family, are near American cities but eating MREs. Let them go home.

“When you give a soldier a real mission, you have less of a morale problem, even if it’s Christmas or Thanksgiving. But when you send a soldier on a dubious mission, with no military value, over Thanksgiving, it doesn’t help morale at all.”

The current deployment has the troops staying where they are until at least December 15, though that could be extended, meaning they would also miss Christmas at home.

Since the election, neither the White House or Trump TV — aka Fox News — have mentioned the migrant caravan from Central America.

Looks like Trump just found a way to be the Grinch of Thanksgiving, too.