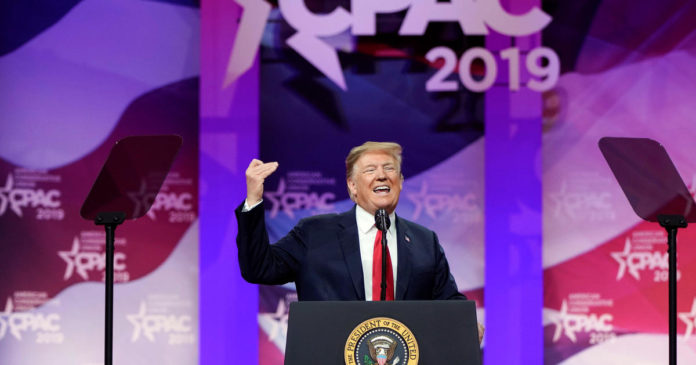 Speaking at the 2019 Conservative Political Action Conference Saturday (CPAC), President Donald Trump went on an extended (and at times frantic) rant about the investigations being conducted of him and his 2016 campaign by Special Counsel Robert Mueller and Congressional Democrats.

“We had people that lost, and unfortunately you put the wrong people in a couple of positions, and they leave people for a long time that should not be there. All of a sudden, they are trying to take you out with bullshit, ok? With bullshit.”

The president then attacked Mueller:

“Now, Robert Mueller never received a vote, and neither did the person that appointed him.”

“‘I am going to recuse myself.’

“Why the hell did he not tell me that before I put him in? How do you recuse yourself? But the person who appointed Robert Mueller never received a vote.”

Later in the speech, Trump also resorted to attacking the press:

Of course, Trump neglected to mention that Jeff Sessions was a U.S. Senator when he chose him to serve as AG, so he had indeed been elected by the people of Alabama. And the president did indeed ask Russia to hack Hillary’s emails, which in itself may be a crime.

As for the charge that members of the press are “sick” and “play dirty,” that’s just classic psychological projection; accusing others of that which you know you yourself to be guilty of.