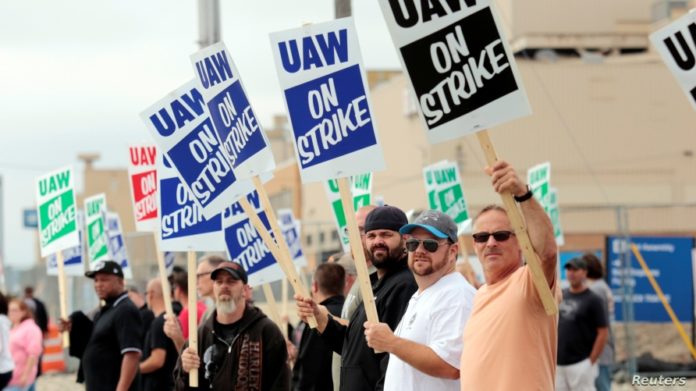 A state that was crucial to President Donald Trump’s 2016 victory is embroiled in a strike between the United Autoworkers Union (UAW) and General Motors, and the economic damage to Michigan could cost Trump the state in 2020, the Chicago Tribune reports.

About 46,000 autoworkers are on strike, and the overall economic slowdown being caused as a result may push Michigan and other Rust Belt states into recession:

Patrick Anderson, the CEO of the Anderson Economic Group, says if the strike continues into a second week, that’s very bad news for Michigan:

“If this strike goes into a second week, you’re going to see parts of Michigan go into a recession. Parts of Michigan are feeling it today. You’re already seeing losses in income and people cutting back on their spending.”

Additionally, the longer the strike lasts, the more pressure Trump will be under to pick a side: Workers or management. As the Tribune notes:

“Trump is in a bind. Backing the union would undermine Trump’s message that labor does not advocate for its workers and give a powerful Democratic force a boost before an election. Siding with GM would call into question his promises to defend workers and he would risk getting blamed for economic woes in Rust Belt states he needs to win reelection.”

Democratic presidential contenders are already siding with the workers:

Auto workers deserve good wages, comprehensive benefits, and economic security. I stand with @UAW as they strike to get what they deserve, and urge GM to come to the table and negotiate in good faith. https://t.co/VRmL7VzSzt

I am proud to support the @UAW workers who are standing up to the greed of GM. Our message to GM is a simple one: End the greed, sit down with the UAW and work out an agreement that treats your workers with the respect and the dignity they deserve. https://t.co/nAQoeX82oz

Michigan State University political scientist Matt Grossmann notes that in the past Republicans have gotten very bad press when they chose to go against the autoworkers:

“‘There is a history of this issue being treacherous in Michigan.’ He noted that Republican Mitt Romney’s presidential campaign suffered in 2012 when Democrats pointed repeatedly to an opinion article he wrote opposing the auto bailout. The headline: ‘Let Detroit Go Bankrupt.’

“It is treacherous to be against the autoworkers.”

It appears that Trump is in a classic no-win situation. And the longer the impasse continues, the worse things will get for him. So much for “the art of the deal.”