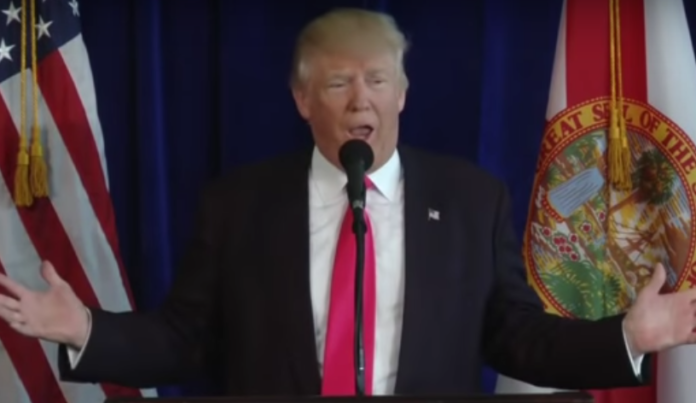 Former White House ethics lawyer Norm Eisen co-wrote an op-ed for USA Today on Wednesday arguing that President Donald Trump colluded with Russia in plain sight and should be prosecuted for it.

But although Trump has repeatedly denied colluding with Russia, Eisen lays out a case showing that Trump did so openly and on video.

On July 27, 2016, Trump stood in front of the cameras and microphones and delivered a message to Russia.

“Russia, if you’re listening, I hope you’re able to find the 30,000 emails that are missing,” he said. “I think you will probably be rewarded mightily by our press.”

And Russia listened and immediately targeted the Clinton campaign and DNC servers in an effort to help Trump.

But it appears that federal investigators and prosecutors have overlooked this obvious instance of Trump committing a crime in the open.

“Federal campaign finance law prohibits any person from soliciting campaign contributions, defined as anything of value to be given to influence an election, from a foreign national, including a foreign government,” the USA Today op-ed explains. “In asking Russia to find Clinton’s emails, presidential candidate Trump violated this statutory prohibition on seeking help from a foreign country to influence an election. Trump, in essence, called on a foreign adversary to locate and release something that was of great value to him and his campaign.”

In fact, even if Russia did not help him, Trump still broke the broke the law because it’s very specific — and for good reason.

“The law provides that such a solicitation is illegal regardless of whether the person soliciting the help receives anything in return,” the op-ed continues. “The risks of foreign intrusion in our elections are so great that even asking for help from foreigners without consummation is a crime. But in this case, on or around the same day that Trump solicited help from Russia, Russia made its first attempt to break into servers that Hillary Clinton’s personal office used. That event is laid out in detail in an indictment of Russian hackers obtained by special counsel Robert Mueller.”

Eisen and his co-writer Fred Wertheimer go on to directly quoting the specific statute Trump violated.

Some may say Trump’s invitation was merely campaign rhetoric or hyperbole, which should not be criminalized. But that is to ignore the plain language of the law, and its purpose: to protect the United States from the influence of foreign countries in our elections. The statute says “It shall be unlawful for … a person to solicit, accept or receive a contribution or donation … from a foreign national.”In using the word “or,” the statute makes plain that the act of solicitation in and of itself is a violation. The danger of Trump’s words can be seen in the fact that Russia took them both seriously and literally.

And despite the Justice Department claiming that Trump can’t be indicted, Eisen argues to the contrary, but concluded by pointing out that even if the DOJ nixes indictment, Trump can still be named an unindicted co-conspirator and prosecuted if he fails to win re-election since the statute of limitations is five years in this case. But even if Trump wins, it should be pointed out that Trump could still be on the hook to be prosecuted since federal prosecutors can extend the statute of limitations, especially if Trump is found to have attempted to obstruct in an effort to cover up his alleged crimes during an ongoing investigation.

However, Trump has also admitted to colluding with Russia. And he did so on Twitter this past August when he admitted that his campaign met with Russian agents to get “dirt” on Hillary Clinton inside Trump Tower just weeks before Trump solicited Russia for help to find emails.

Again, the law expressly prohibits political campaigns from engaging in this kind of activity.

Trump has spent a lot of time incriminating himself on Twitter and in public statements that Mueller has undoubtedly collected and preserved as evidence, so much so that Republicans will eventually have no choice but to impeach him, which means prosecutors will be ready with a ton of indictments. That is, unless Trump cuts a deal to resign.