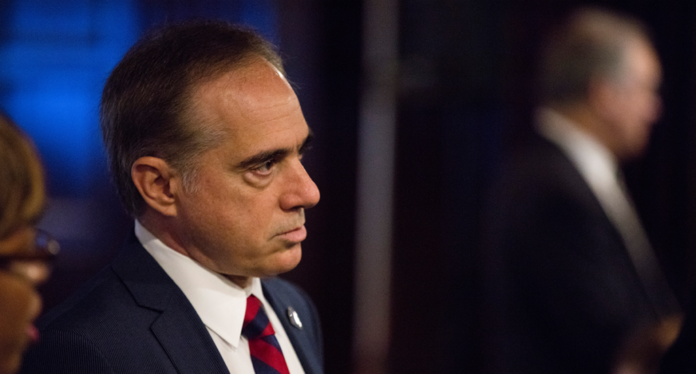 The report found that Shulkin, a favorite of President Trump, directed his aide to act as his “personal travel concierge” for him and his wife. Shulkin responded to the report, saying it was:

“…Entirely inaccurate … [and] reeks of an agenda.”

Not only that but Shulkin’s chief of staff, Viveca Wright Simpson, the VA’s third-most senior official, altered an official email to secure approval to use taxpayer funding for Shulkin’s wife’s airfare, costing more than $4,000. Simpson also reportedly made false statements to a department ethics official.

The Post reports that Simpson altered language in the email to:

“…Make it appear that Shulkin was receiving an award from the Danish government — then used the award to justify paying for his wife’s travel.”

JUST IN: VA Secretary David Shulkin's chief of staff altered an email and made false statements to a department ethics official that led to taxpayers covering expenses for Shulkin's wife on an official trip to Europe, the agency's inspector general says https://t.co/DvOkUbnBuQ pic.twitter.com/pqODA5CJee

Shulkin appears to have misrepresented the relationship he and the woman who provided the Wimbledon ticks shared. Although he claimed she was a “personal friend,” the inspector general found they had only met three times before, at official events.

” […] Nearly half the 10-day trip last July was spent sightseeing, and Shulkin directed an aide beforehand to plan the leisure activities with his wife and the aide made “extensive use of official time” to make the arrangements, investigators found.”

Although Shulkin claimed he had nothing to do with obtaining taxpayer funds for his wife’s airfare, Inspector General Michael Missal made recommendations that Shulkin reimburses the VA and his “personal friend” for the Wimbledon tickets, as well as taking disciplinary action against his chief of staff.

Shulkin objected to the findings of the report but still agreed to comply with the inspector general’s recommendations. Shulkin wrote

“It is outrageous that you would portray my wife and me as attempting to take advantage of the government.”

Shulkin is the sixth on a growing list of  current and former Trump administration Cabinet members who the inspectors general are scrutinizing for the possibility that they misused misuse of taxpayer funds for their travel expenses, including former Health and Human Services Secretary Tom Price, Treasury Secretary Steven Mnuchin, Department of the Interior Secretary Ryan Zinke, and Environmental Protection Agency Administrator, Scott Pruitt.