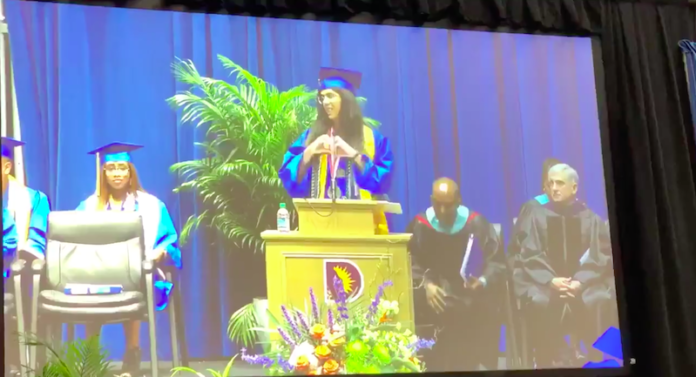 While police brutality may be the hot topic of the headlines, it’s still a sore subject in much of the country. And sometimes, aversion to talking about it can even lead to aggression. That’s what valedictorian Rooha Haghar of Dallas, Texas learned while delivering her address to her classmates.

According to a report by the Washington Post, Haghar wanted to celebrate her classmates, while acknowledging societal circumstances that kept others from achieving the same goals — namely mass shootings:

But when it came to acknowledging young black men who have died at the hands of police and other officials, she says her principal drew the line, fearing that would be too much of a political statement.

Haghar took to Twitter to post a video, lambasting the administration as “pathetic” for chalking the incident up to “technical difficulties.”

In almost all cases, school administrators claim that students had submitted comments for approval, and any deviation would result in a mic cut, regardless of content.

However, this same situation has played out all over the country, with valedictorians being cut off for bringing up sensitive topics, including police brutality, sexual assault, and constitutional rights.

Haghar is part of a growing movement for social change among young people. From young people voting in historic numbers in the 2018 midterms to the massively successful March For Our Lives rally to combat gun violence, today’s youth are more likely to view being politically engaged as a responsibility, not a hobby.

But no matter how many presidential letters of commendation they receive, students often find themselves in a Catch 22 — that is, the trap of a society that urges them to be conscious and concerned citizens, but brutally attacks them for doing so (or worse).

Unfortunately for the school administrations, quelling social messages like these only ensure that they find their way outside of individual communities and into the broader conversations these students are engaging with.