The United States Blues
Home Uncategorized Valedictorian thanks the drunk, unavailable, and negligent people that shaped her education... 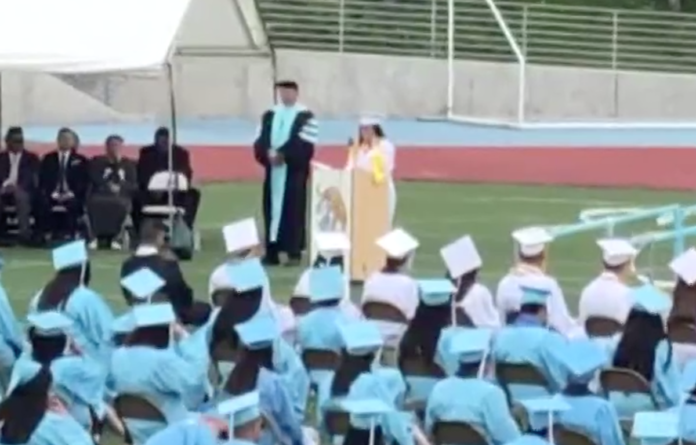 One of the highlights of any graduation ceremony is hearing from your class valedictorian. We always expect some inspirational words, some sentimental thoughts, and some reflections about achieving goals and moving toward a promising future. Generally, nobody expects “scorched earth,” but that’s what happened at San Diego’s San Ysidro High School last Thursday.

On a football field full of excited graduates and teachers in their ceremonial baby blue and white caps and gowns, Valedictorian Nataly Buhr started out her address as one would expect. She thanks friends for the cherished memories, teachers who helped her succeed, and her parents for their love and support. Then things took a dramatic, and brutally honest turn.

Her ire turned to a school counselor who she says wasn’t’ available, yet showed interest when they learned she would be valedictorian.

“Thanks for teaching me to fend for myself: You were always unavailable to my parents and I, despite appointments. … You expressed to me your joy in knowing that one of your students was valedictorian when you had absolutely no role in my achievements.”

The crowd started to show signs of discomfort, fidgeting around in their seats, but Buhr was just getting warmed up, turning her attention to office staff she says were negligent.

“Thank you for teaching me how to be resourceful. Your negligence to inform me of several scholarships until the day before they were due potentially caused me to miss out on thousands of dollars. When applying for a work permit, you repeatedly turned me away, despite confirming with my employer and my parents that all of my paperwork was filled out correctly. I’ve had to escalate issues with staff to an assistant principal various times to reach any sort of solution.”

At this point, people in the crowd appeared to be in disbelief, looking at each other in apparent shock, but it wasn’t over yet. Buhr then called out a teacher for being drunk at school. As she spoke the graduates really got excited, some starting to jump to their feet, others cheering, clapping, and applauding.

“To the teacher who was regularly intoxicated during class this year,” she said. “Thank you for using yourself as an example to teach students about the dangers of alcoholism. Being escorted by police out of school left a lasting impression.”

“I hope that future students and staff learn from these examples,” she finished.

While the crowd no doubt expected a rather ordinary valedictory speech, what they got will certainly never be forgotten. That’s certainly true for school staff in the Sweetwater Union High School District. Buhr’s speech deviated from what was preapproved by the school.

A spokesperson for the district, Manuel Rubio told the local news that he wished Buhr had not taken away from the positive things the school has done.

“We think that the student’s speech was inappropriate and out of line,” Rubio said in an email Tuesday. “While we definitely welcome the concerns of students and their families regarding any situation at one of our schools, doing so in such a manner without any prior knowledge of this situation by the school, is not the right way of handling this. Ultimately this takes away from what should have been a day of celebration for the school and their community.”

However, Buhr responded, saying she hopes what she did will encourage more students to speak out in the future. Her mother, Monica Serratos, is proud of her daughter for speaking out and opening up school officials’ eyes.

“I was proud that she spoke up and got it out. It is something that takes a lot courage to do,” said Serratos.

Nataly told CBS8 she has received “mostly positive feedback” and she and her parents stand by her decision.

“In the beginning, I recognized and thanked those who I believe went above and beyond for the students,” Buhr said in her CBS interview. “I understand that those I criticized may be facing personal issues, but I don’t think that should affect their commitments or the school’s responsibility to fulfill their commitments. I didn’t expect for change to come from my speech, but I was hoping it would encourage more students to speak up.”

Some examples of the varied feedback online appear below:

I'm so proud to be from San Diego right now. Go Nataly Buhr! Fuck The Man! blaze your own path! and I hope your family is as proud of you as I am ✊https://t.co/mY5zAJOiIq

Brave, but not the right platform. She and her parents were responsible for looking into some of those resources #SanYsidroHighSchool #valedictorian #NatalyBuhr https://t.co/RfdWYqTSMY

One thing is certain: Nobody will forget Nataly Buhr’s speech because she did the unexpected. Instead of glossing over the problems that could have held her back, she recognized that they helped her become stronger and succeed despite them. That’s a valuable lesson for any graduate, though certainly a stinging and awkward moment for the school.

More of the speech below: