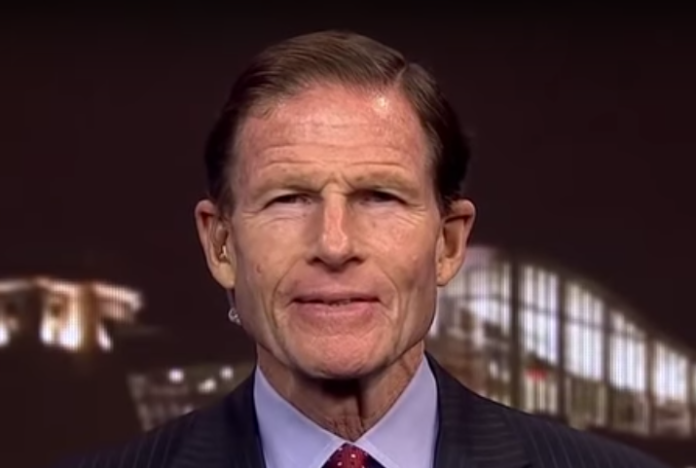 President Donald Trump went off the rails on Saturday afternoon by disgustingly attacking Senator Richard Blumenthal (D-Conn.) is a tweet beneath the dignity of the office, and one that immediately drew condemnation from military veterans.

“Donald Trump is an unindicted co-conspirator,” Blumenthal said. “Think of it for a moment. Unindicted co-conspirator. And the further information in this bombshell memorandum shows facts and evidence that link that conspiracy to Russian collusion with the Trump campaign and potentially obstruction of justice. So the pieces of the mosaic or the puzzle are coming into place, and the walls are closing in on Donald Trump and his inner circle, including his family.”

Trump would later hear Blumenthal’s remarks and lashed out at him on Twitter in the most undignified way:

Watched Da Nang Dick Blumenthal on television spewing facts almost as accurate as his bravery in Vietnam (which he never saw). As the bullets whizzed by Da Nang Dicks head, as he was saving soldiers….

….left and right, he then woke up from his dream screaming that HE LIED. Next time I go to Vietnam I will ask “the Dick” to travel with me!

It’s true that Blumenthal did not serve in the Vietnam War, but he did serve in the Marine Corps Reserve during the conflict, which is more than what Trump can say because he dodged the draft five times in order to avoid military service.

Trump has also repeatedly insulted veterans, including the late Senator John McCain and former Secretary of State John Kerry, attacked a Gold Star family, refused to honor fallen World War I soldiers because it was raining, and is too scared to visit troops in war zones.

This attack on Blumenthal is yet another low and is a hypocritical one at that. Had Blumenthal’s reserve unit been called up to serve in the war, he would have gone to Vietnam. Trump avoided military service altogether like a coward.

Even veterans ripped Trump on Twitter for the cheap shot.

Trump never served our country and he damn sure isn’t going to start now. In his world it’s all about serving Trump.

SOMEONE WITH 5 DEFERMENTS SHOULD NOT SPEAK OF VIETNAM.

I served during peace time and even I’m more of a veteran than you. You have no right to criticize ANY soldier

You, a 5 time draft dodger who refused to attend a WWI service in France and Arlington on Vets Day because of drizzle, should not be referring to anyone’s military service. #CadetBoneSpurs

Cadet bone spurs! While you may be a decorated veteran of Studio 54, you’re a COWARD of the highest order. Not only did sherk your DUTY to serve in Vietnam, you have yet to fulfill your DUTY as Commander in Chief by visiting our brave servicemembers in a war zone.

You are a 5 time draft dodging COWARD. You have no right to call others names. You were the slime ball who said “The ‘80’s was my own personal VietNam” because you didn’t get an STD. As a Veteran you offend the hell out of me. Tin pot dictator.

Is this when Individual-1 became our President? https://t.co/3qdtmbqZpQ

Not only is this embarassing for America, but #CadetBoneSpurs, here, ran away scared from serving in the military, at all. pic.twitter.com/kcMmv2taGY

Also, BTW, @realDonaldTrump has been too afraid, thus far, to visit troops in combat zones. So, maybe he should sit this one out.

Every time Trump attacks a person who wore the uniform of our armed services, he makes it harder for anyone in the military or who has loved ones in the military to support him. Trump’s support among active duty troops has fallen more than two percent since 2016 while his disapproval has risen over six percent. His numbers are now dead even. And it’s only going to get worse if he continues talking about a topic he has no business talking about.