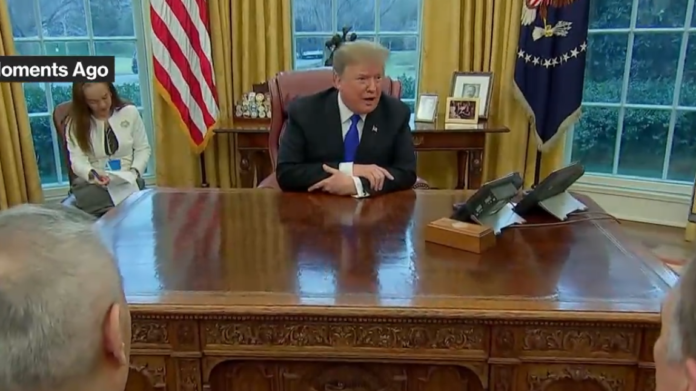 President Donald Trump proved Friday why almost no one wants to join his administration or work for him, humiliating his own trade representative in front of visiting Chinese dignitaries while cameras were rolling.

In an exchange with Robert Lighthizer, the U.S. Trade Representative, the two men were discussing the meaning of a “memorandum of understanding” (MOU) as it applies to trade deals. Trump told reporters that any memorandums with China would “be very short term,” then adding:

“I don’t like MOUs because they don’t mean anything.”

Lighthizer defended the use of MOUs, commenting:

“An MOU is a binding agreement between two people….it’s detailed [and] covers everything in great detail. It’s a legal term….a contract.”

Clearly amused by the disagreement between Trump and Lighthizer, Chinese Vice Premier Liu He began laughing.

Then Trump directly addressed Lighthizer, determined to assert his own authority:

“The real question is, Bob, how long will it take to put that into a final binding contract?”

Rather than explain his position to Trump, Lighthizer caved and told reporters:

“From now on we’re not using the word memorandum of understanding anymore. We’re going to use the term trade agreement. We’ll have the same document [but] it’s going to be called a trade agreement.”

The exchange between Trump and his trade expert is emblematic of what other former staffers have said about the president’s style of so-called management: He’s always right, even when he doesn’t know what in the hell he’s talking about.

There have been numerous reports of chaos and infighting inside the Trump administration. That sort of disarray and backstabbing comes from the top. If staffers don’t think they can trust Trump to have their backs, that makes them more willing to leak to the press or ignore what he says.

Here’s a prediction: Once the China trade deal is finalized, Robert Lighthizer will be leaving the administration. Trump will never be able to forgive Lighthizer for daring to disagree with him, especially in front of reporters.