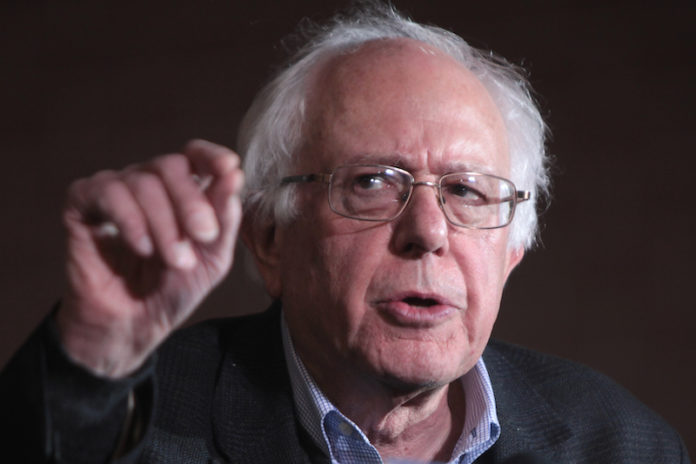 Love him or hate him, Bernie Sanders is running for president. So far, his campaign announcement has sent shockwaves through an already crowded Democratic primary. According to the New York Times, upon announcement, Sanders’ campaign received $6 million in donations in just 24 hours. Unfortunately, Sanders’ presence in the race reanimates some of the ugliest parts of his bitter primary battle with Hillary Clinton — and the bots know it.

In a viral Twitter thread, writer and lawyer Amee Vanderpool laid out how the enemies of the left will use Sanders to divide the coalition for the 2020 election. She began by detailing some of the internet abuse she suffered at the hands of fans of Bernie Sanders.

It was blatant misogyny and sexism from real people who called themselves Progressives and when the Bernie Bros were called out for their online harassment, mostly of women, Bernie did nothing to stop it. 5/

However, real people were not the only people attacking Vanderpool, and that’s the threat she focuses on. According to Vanderpool, bots are looking to divide the left in 2020, and we are just as underprepared as we were in 2016.

I will not use the #NeverBernie tag, not because I don't feel it, but because it divides us and you can expect both sides of this argument to be riddled with Russian trolls. It's a waste of time and meant to anger/upset/hurt you, so don't fall for it. 11/

Vanderpool also included helpful tips about not engaging with trolls online. There are a few telltale signs of a troll vs. a person. Even on the off chance that a troll is actually a human being, arguing online rarely changes people’s minds. So if it’s risky and likely to be a thread full of Russian trolls, maybe it’s not worth it.

(Example ?? Look at this comment, assess it. Don't react, see it for what it is-attempt to bait. Go to @McSkooch, get a feel for the account. Fakes have this feel. New, little info, low follower count, ect.
Likely not real, DEFINITELY not worth it. Block or mute, don't engage. pic.twitter.com/az1OIMOEZX

Vanderpool is also not overstating how underprepared America is for this election on the cybersecurity front. According to a March 2018 report by The Independent, Trump has spent little attention on how to counter Russian intelligence.

In late 2016, Congress directed the Pentagon to send $60m to the State Department to counter anti-democratic propaganda by China and Russia, with a further $60 million made available in the last few months, according to the report.

But none of it has yet reached the State Department, the NYT alleges, citing department officials who say they expect to receive the first instalment ($40m) in April.

The point is that out of $120 million dollars to combat Russian meddling, Trump has used $0. And that’s because Russian meddling helps him, which the Russian bots are aware of. Though there are many legitimate grievances to have with Senator Bernie Sanders, it’s going to take a keen eye this election to avoid promoting propaganda designed to keep the current president in power.