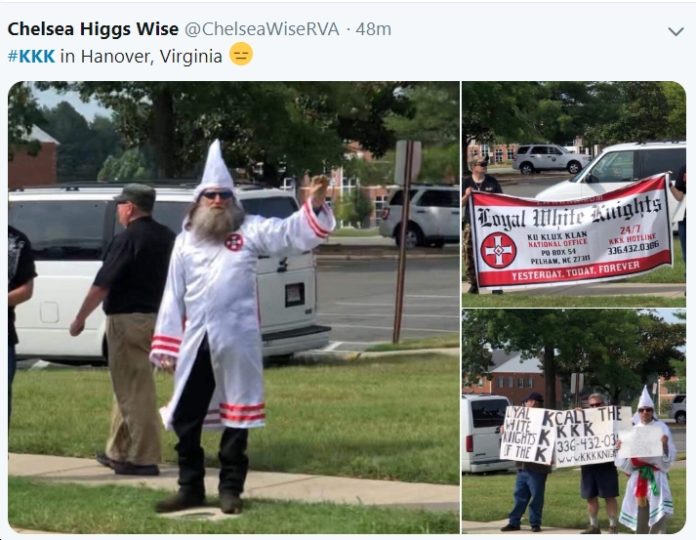 A Virginia woman confronted hooded members of the Ku Klux Klan (KKK) who were marching in front of a courthouse in Hanover, telling them to “get out” of her country in YouTube video that has quickly gone viral.

As members of the Loyal White Knights from Pelham, North Carolina demonstrated in Hanover, the mother said she let the group know that hate is not welcome here.

“I was just getting so mad, but I was also shaking,” said Shannon Spiggle, a mother of three who said she was not going to let their call go unanswered.

“I wasn’t exactly sure what I was going to do,” said Spiggle, who confronted the group while rolling on Facebook live.

“You’re a disgrace to this country! Go home! Get out of my county!” she yelled in the video.

“Where it is their right to demonstrate, they have to deal with the consequences that they’re not welcome, not in my county, not where my children are growing up,” she said.

Spiggle, who is Jewish, said she comes from a long line of activists:

“I’m the great great great granddaughter of America’s first reformed Rabbi. They told me to go back to Israel, which I found to be funny because my ancestors came to the Americas in the 1620s. They helped build this country. My grandfather helped change Judaism.”

“Those kind of things that we saw in Hanover are inexcusable.”

Right-wing terror groups such as the KKK seem to feel emboldened since Donald Trump became president. In August of 2017, neo-Nazis marched in Charlottesville, Virginia, chanting “Jews will not replace us.” Trump later claimed there were “fine people” among the neo-Nazis and has also remarked that he doesn’t see white supremacists as a terror threat.