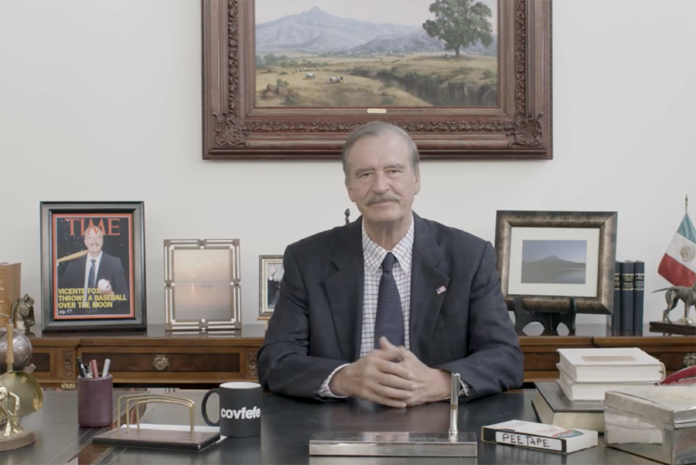 Former Mexican president Vicente Fox has announced that he is running for President of the United States.

Fox made his announcement in a video in which he referred to Donald Trump as a “rotting Halloween pumpkin” and brought a donkey into his office carrying a campaign message of “taco trucks on every corner” on its back. Watch the announcement below!

The former president has repeatedly trolled Donald Trump across the internet for being awful at his job. This week, we could use some good humor. Leave it to Vicente!

“Hello. It’s me, Vicente Fox, with another message for last year’s rotting Halloween pumpkin. Donald, every time I make fun of you, which I do a lot, people say, ‘Why can’t you be our president?’ America, I feel your pain. We all do. And that is why today I’m proud to announce my candidacy for the presidency of the United States.”

Well, Fox has my vote. He has some pretty solid campaign promises, as well.

In his announcement, he promises to have a small inauguration. “Bigger than Trump’s, of course”, but still tiny. Fox promises to put together a competent cabinet, referring to Trump’s cabinet as a disgrace.

“Trump, you have the worst team since the team that was beaten by Air Bud, a basketball playing golden retriever, who has no hands, which are so, so necessary for the sport of basketball.”

Fox promises to build a “beautiful” wall, holding up an image of a brick wall being built around Trump Tower. The wall will be built unless “Donald Trump has moved to a new home, which already has a wall.” The image regarding Trump’s new home is one of a prison fence.

Fox also promises never to defend Nazis like any good president. He would also undo all of Trump’s hateful legislation if there weren’t something standing in the way:

“Amigo, you haven’t passed a fucken thing. I’m not even president yet and we have both passed the same amount of substantial legislation.”

Are you ready for a Fox presidency!?

Fox can’t actually be president because he was born in Mexico. He had an answer to that too.

“Now I know, a lot of you will say, ‘How can you be president? You’re a Mexican!’ And to those people, I have three words: Donald. Fucken. Trump.”

The announcement also included this uplifting message for Americans everywhere:

“If that worn-out baseball glove tightly gripping a turd can be president, then, amigos, anyone can.”

To top it all off, Fox’s campaign song is a mariachi ballad composed of these irresistible lyrics:

Finally, to put the cherry on top, Vicente says that he’s ordered 5 million red baseball caps reading, “Always Ask Before Grabbing a Pussy”, “65 Million is More than 62 Million”, “Putin is Not My Papi”, “Trump has Baby Fingers”, and “Not afraid of Stairs”.