The United States Blues
Home Politics Congress Voters in Maine say they dislike Susan Collins even more than they... 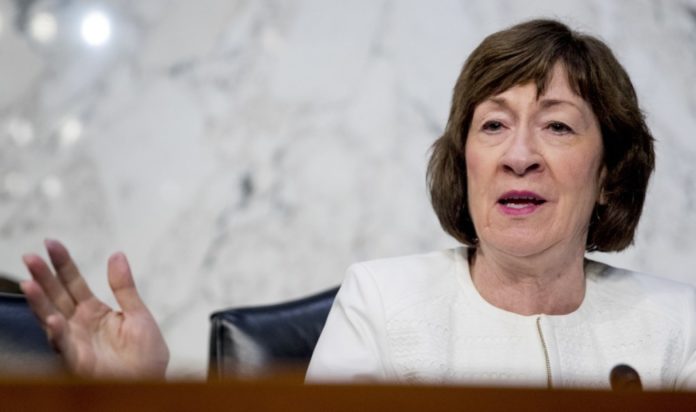 As the 2020 election draws closer each day, it’s beginning to look like incumbent Maine GOP Senator Susan Collins is on the verge of being becoming a former senator.

A new poll from Public Policy Polling (PPP) which was released this week shows that President Donald Trump — who is facing impeachment and removal from office — is more popular in Maine than Collins.

The PPP poll shows that 42 percent of those surveyed approve of the job Trump is doing. But only 35 percent said they approve of how Collins is doing her job as senator.

Fully half of poll respondents — 50 percent — said they don’t approve of Collins and the job she’s doing.

ShareBlue Media notes that Collins was extremely popular with her constituents as recently as 2017:

As recently as 2017, similar polling showed Collins to be one of the most popular senators in the country, according to FiveThirtyEight. Polling conducted in 2018, however, showed that popularity waning, especially after Collins publicly came out in support of Justice Brett Kavanaugh’s nomination to the Supreme Court amid allegations of sexual assault.

The most recent poll was conducted less than a month after House Speaker Nancy Pelosi announced a formal impeachment inquiry into Trump for his efforts to persuade Ukraine to investigate his political rival, Joe Biden. Most Mainers support impeachment, according to PPP, and Collins seems to be in a lose-lose situation no matter how she chooses to come down on the issue.

The PPP poll also shows that should Collins vote to impeach Trump, voters would still support her Democratic opponent by a margin of 38 to 22 percent.

However, if Collins were to vote to acquit Trump, the numbers get even more disastrous for her, showing her losing to a Democrat by a 47-40 margin.

And Collins is also falling behind in the race for money:

Gideon raised $3.2 million in the past quarter, around $1.1 million more than Collins from July through September.

Much like the GOP as a whole, Collins has yoked herself to Trump on several issues — confirming Brett Kavanaugh to the Supreme Court; voting to allow the president to take money from the military so he can build his border wall — and now she has to pay the price for her loyalty to a historically unpopular president.