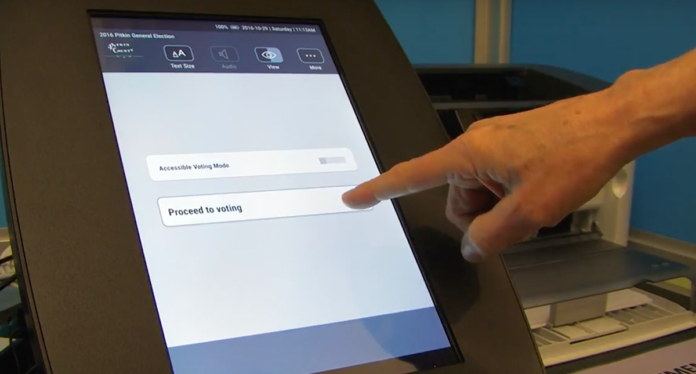 As we become more aware that President Donald Trump refuses to do one thing to prevent Russian interference in the mid-terms or other elections, and that it is almost certain the Russians are working on it as you read this, we learn that electronic voting machines in 14 states are vulnerable to hackers right now and will remain vulnerable in the mid-terms.

As if Russian trolls weren’t successful enough in undermining confidence in democratic elections during the presidential election, consider that many states only offer paperless touchscreen voting machines, which can’t be audited for accuracy or for some types of self-deleting and vote-altering malware planted by hackers.

“If there is no way to audit the election, that is absolutely a national security concern.”

If your state doesn’t provide touchscreen machines that also produce paper copies of ballots, then the votes may not be audited in the event of a discrepancy or security concern.

Sometimes technology really isn’t as great as the good ole’ days of paper ballots. Paper-based ballots cost a fraction as much as high-fangled touchscreens anyway.

States where you may use paperless touch-screens in some counties, and sometimes the entire state:

Congress recently allotted $380 million as part of the spending bill to replace outdated and vulnerable equipment, but they failed to require that the machines leave a paper trail or to specifically target the hardest-hit states listed above.

James Scott, a “cybersecurity whiz” who advises US intelligence and Congress on voting security, says the situation looks dire. The vendors who manufacture the machines could be targeted by foreign attacks and their servers could be poisoned with programs that can manipulate vote outcome.

The malware can remain undetected, destroying itself when it has completed corrupting the data. He says the manufacturers have done little to address the concerns.

McClatchy reported on the long and sordid history of blunders by Congress to address ongoing concerns about election fraud following the 2000 debacle of an election between Republican George W. Bush and Democrat Al Gore.

If you recall the “hanging chad” incident, the outcome of the election came down to just a few hundred votes in the state of Florida, a toss-up that resulted in a legal battle. Al Gore finally conceded a month after the vote, and the ballots weren’t recounted by hand. We’ll never know who really won the election, although many believe it was rightfully Gore.

Since then, experts have warned Congress that you can’t verify the accuracy of votes on paperless touch-screens. They still believe that today. A Federal official told McClatchy that it was “knowingly wrong” how Congress addressed the issue since the Bush election. Susan Greenhalgh, National Election Defense Coalition policy director, said:

“The bottom line is that no amount of security precautions can ensure a voting system hasn’t been manipulated and the election outcome is correct unless it is audited with a voter-verified paper ballot.”

Unauditable voting systems without a paper ballot are vulnerable to undetectable hacking. We’ve known this for years. Why has the federal Election Assistance Commission been quiet about it? #elections #voting #Election2018 @electiondefense https://t.co/ncLBd69kU0

As we head into the mid-terms, elections that will determine if we can correct the egregious assault on progressive values and democracy by the both the Russians and the Trump administration, it appears we have the cards stacked against us. Congress should have addressed this long before now.

They failed us, and it’s up to everyone to demand their vote be counted. For many, it may not happen in time.

However, do not mistake this as a sign that your vote doesn’t matter. If anything, it means voters must turn out in overwhelming unquestionable numbers. We’ll need to win by a large margin.

From the look of recent elections, that is entirely possible.