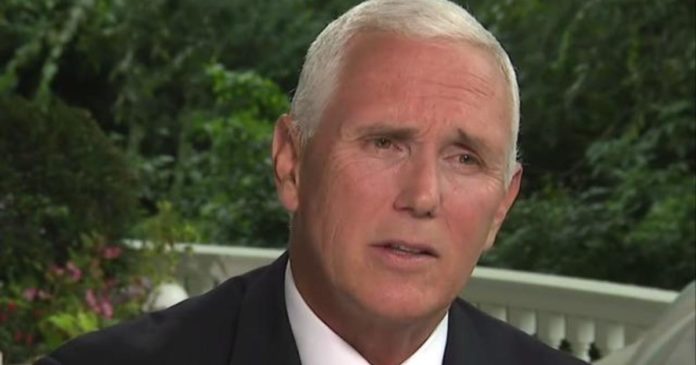 Vice President Mike Pence took to Twitter Tuesday morning to praise the release of two Reuters journalists who had been imprisoned for over 500 days because they reported on the murder of ten Rohingya Muslim men and boys by security forces in the nation of Myanmar:

Great news! @Reuters journalists Wa Lone & Kyaw Soe Oo have been released from prison in Burma where they were jailed for doing their job reporting on atrocities committed against the Rohingya people. Freedom of religion & freedom of the press are essential to a strong democracy! https://t.co/qc3eD8XeJ6

The news that these two brave reporters is indeed good news, but as many Twitter users pointed out, Pence’s celebration is the height of hypocrisy in light of the fact that his boss, President Donald Trump, often refers to the American news media as the “enemy of the people.”

Great news for those journalists. I’m happy for them and their families. I agree. Freedom of the press is essential to a strong democracy, so please stand behind those words in our country. Speak out when you see someone bashing journalists. What about Jamal Khashoggi?

I’m confused, is the Press the enemy of the people or isn’t it? @realDonaldTrump

So interesting since we have a president that screams the American press is the enemy of the people and would love to be able to lock them up.

Good thing they weren’t in Saudi Arabia or North Korea, where your great leader loves to watch them murdered.

Really? Coming from a member of the Trump team, a team that stands behind a president who continually threatens and endangers a free US press. Wow. You continue to amaze.

Really? Coming from a member of the Trump team, a team that stands behind a president who continually threatens and endangers a free US press. Wow. You continue to amaze.

“Freedom of religion & freedom of the press are essential to a strong democracy!” ~Mike Pence, forgetting who he serves with.