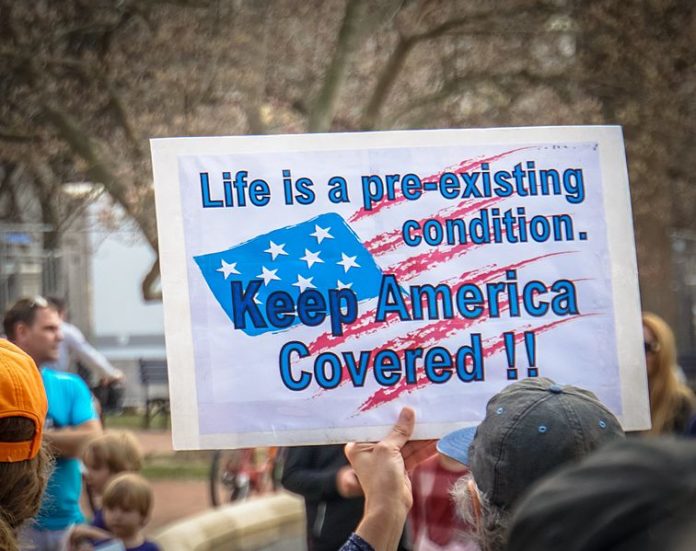 President Donald Trump and Republicans are being warned by the Wall Street Journal to stop cheering a federal judge’s recent ruling against the Affordable Care Act because it’s going to backfire spectacularly.

It didn’t take long before Trump praised the ruling on Twitter.

Wow, but not surprisingly, ObamaCare was just ruled UNCONSTITUTIONAL by a highly respected judge in Texas. Great news for America!

Republicans across the country have followed his lead by bragging about the ruling, and Trump doubled down on Monday.

The DEDUCTIBLE which comes with ObamaCare is so high that it is practically not even useable! Hurts families badly. We have a chance, working with the Democrats, to deliver great HealthCare! A confirming Supreme Court Decision will lead to GREAT HealthCare results for Americans!

But their arrogance will likely come back to haunt them because the ruling will likely be overturned because O’Connor’s argument is very weak, something the Wall Street Journal pointed out in an editorial.

“The Supreme Court’s ‘severability’ doctrine calls for restraint in declaring an entire law illegal merely because one part of it is,” the editors observed. “Our guess is that even the right-leaning Fifth Circuit Court of Appeals judges will overturn Judge O’Connor on this point.”

Indeed, it should also be pointed out that the individual mandate was never found by the high court to be illegal, which upheld the law in 2012, with Chief Justice John Roberts issuing the deciding vote.

The Wall Street Journal’s “guess” is in line with what former President Obama wrote in his own response the ruling on Saturday.

Congressional Republicans repealed the individual mandate within their disastrous tax cuts for the wealthy last December, but they failed repeatedly to repeal the whole law.

The Wall Street Journal also warned Republicans that their cheering sends a message to American voters that they still don’t care about their healthcare, which was a deciding issue in many races the GOP lost in the midterm election in November that resulted in Democrats winning 40 House seats and the most votes ever in a midterm.

“Democrats claim to be alarmed by the ruling but the truth is they’re elated,” the WSJ says. “They want to use it to further pound Republicans for denying health insurance for pre-existing conditions if the law is overturned. Democrats campaigned across the country against Mr. Paxton’s lawsuit to gain House and Senate seats in November, and they will now press votes in Congress so they can compound the gains in 2020.”

Again, they are not wrong and it’s in line with what Obama wrote when he pointed out that Republicans have been assaulting the law since its passage and that this ruling proves they don’t intend to stop until they are voted out of office.

Millions of Americans rely on the pre-existing conditions protections that Obamacare provides, as well as the subsidies for low-income Americans, many of whom live in red states.

The Wall Street Journal then proceeded to criticize Trump’s tweets.

“President Trump hailed the ruling in a tweet, but he has never understood the Affordable Care Act,”

As I predicted all along, Obamacare has been struck down as an UNCONSTITUTIONAL disaster! Now Congress must pass a STRONG law that provides GREAT healthcare and protects pre-existing conditions. Mitch and Nancy, get it done!

This is also a true analysis because the Affordable Care Act already protects Americans with pre-existing conditions. Furthermore, Trump’s own actions to undermine the law contributed to the higher premiums he is using as an excuse to call for the law to be repealed.

Many insurers cite two key drivers of the increases: Congress’ elimination of the penalty for the individual mandate — which requires nearly all Americans to have coverage or pay up — and the Trump administration’s expected expansion of two types of health plans that don’t have to adhere to Obamacare’s regulations.

It can’t be stressed enough that Republicans suffered a massive defeat in the midterm election this year because Democrats repeatedly slammed them for attacking the Affordable Care Act. In fact, the issue even helped Democrats score a victory in Arizona for a Senate seat that had long been held by the GOP.

By celebrating the court ruling prematurely, Republicans are putting themselves in the vulnerable position of being attacked by Democrats in 2020 over healthcare, something every American wants easy and affordable access to, and something Republicans have been ruthlessly trying to take away from them for several years. It’s not something to brag about. And even if higher courts reverse the ruling, Republicans have already committed political suicide.