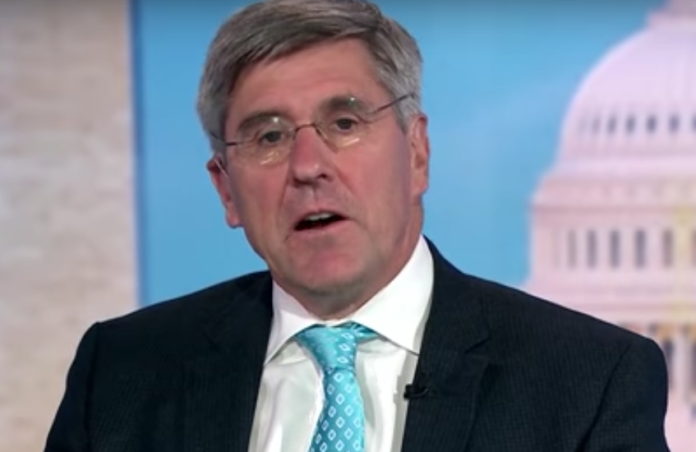 Washington Post business columnist Catherine Rampbell skewered President Donald Trump’s nomination of economic crackpot Stephen Moore to the Federal Reserve Board on Tuesday in a column explaining why the Senate should reject him.

Trump nominated Moore earlier this month as he continues to criticize and attack the Federal Reserve for making independent monetary decisions that are best for the nation and the economy instead of doing what Trump wants them to do.

Since Moore is a Trump supporter who has called for firing all current board members, of course, Trump would nominate him for a position on that same board.

The problem is that Moore is clearly biased for Trump and his past statements and actions make it clear that he is incapable of making non-partisan decisions in the best interest of the economy. Instead, he will only do what’s politically expedient for the GOP even if it completely crashes the economy in the future.

“Moore’s many economic claims over the years have revealed him to be, shall we say, easily confused,” Rampbell began in her Washington Post column. “A decade ago, as the Fed was battling deflation (that is, price declines) during the financial crisis, Moore preposterously fearmongered that hyperinflation (that is, out-of-control price increases) was nigh: Americans could soon be carting ‘wheelbarrows full’ of cash a la Weimar Germany.”

As we all know, Moore’s predictions did not come to pass, and neither did more current predictions about disastrous tax cut policies.

“Moore has also repeatedly predicted that tax cuts would pay for themselves — both at the federal level, and in Kansas — despite all evidence to the contrary,” Rampbell noted.

Indeed, Kansas Republicans kneecapped the state’s economy with massive tax cuts for the wealthy, a model Trump adopted when his own massive cuts for the rich were passed. Predictably, the deficit skyrocketed and the rest of the American people got screwed, including Trump’s own supporters.

“It’s not only his forecasts for the future that have proved chronically incorrect; it’s his characterizations of past and present, too,” Rampbell continued.

A newspaper banned him from its pages because of his struggles in getting basic statistics right. During the dozens of times I’ve debated him on TV, he has persistently misstated easily Google-able facts. These include whether the country is experiencing deflation, whether Canada’s tariffs are “twice as high as” ours, and whether the Fed predicted that Trump would crash the stock market. (Nope, nope, and huh ? )

Now, somehow, Moore has been nominated to the Fed. To understand why this is concerning, consider a brief primer of what the Fed does.

The Federal Reserve exists to take politics out of monetary policy and make the best decisions for the health of the economy.

But Trump wants that to change, which is why Rampbell compared a Federal Reserve with Moore as a board member, or even the chairman, to the central bank in Venezuela, a nation Trump and the GOP have used as an example to scare people about socialism.

“When a central bank looks politically compromised — as has happened in places such as Argentina and Venezuela — people don’t believe it will make the unpopular choices needed to stamp out inflation,” she wrote. “So, firms start jacking up prices and wages in anticipation of more money flooding the economy.”

In the end, Rampbell warned that Moore will make his decisions based solely on political loyalty to Trump, which will destabilize an economy that already faces recession because of Trump’s tax and trade policies.

Moore is a political operative: His policy choices appear to be determined by what’s best for his party, not what is best for the economy. You can see that in the way he cherry-picks or misstates economic numbers in TV debates; or in the fact that he once gleefully nicknamed the Trump tax cuts he helped design “death to Democrats,” predicting the law would hurt unions, colleges, Obamacare and blue states writ large.

None of this bodes well for the future of central bank independence — not just for the remainder of Trump’s presidency, but for either the five or 11 years Moore would serve if he is confirmed by the Senate, depending on which vacancy Trump ultimately nominates him for. Who knows what damage he might be tempted to inflict over that time to make a Republican president look good — or (based on his recommendations during Barack Obama’s presidency) a Democratic one look bad?

Now just imagine if Trump gets to make Federal Reserve decisions. The results could be catastrophic for the rest of us while he and his buddies benefit. If Senate Republicans really care about the economy, they will reject Moore and insist on a more non-partisan nominee.